If They Can't Take A Joke

Confrontational Humor For The Casual Bibliophile 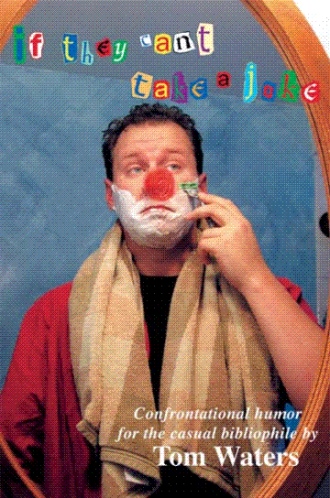 “We Love You Buffalo! Good Night!”

Comprising one half of an established couple is like being in a popular rock band. Press releases have to be sent out, faxed and collated, phone interviews need to be scheduled, and tour dates need to be hammered down. Say goodbye to your home because the two of you are going to be spending some hard time on the road promoting your latest project, whether it’s “We’re Monogamous”, “Here’s Our New Apartment-The Early Recordings”, “Guess Who’s Engaged”, or “We Got A Big Surprise When She Was Late”. Luckily, the t shirt and poster sales have supplemented my income nicely. Lindsay (my better half) and I have been on a whirlwind tour since around November of last year and it would be nice to spend some down time away from the laser light shows, time in the studio, and recruiting of opening acts.

It’s an interesting dynamic the likes of which I’ve never been a part of. Couples I’ve known are vacuuming us up into their universe. Apparently, people in relationships only spend their idle time doing couple related things with other people in relationships. Dinners out, hiking, bike riding, dinners in, wine tasting, cheese eating and other death defying feats. Once the transformation is complete, I’m afraid I won’t be able to hang out with my single friends anymore, and it’s not my fault, either. My single friends are scampering away like cows dispersing from a cattle funeral. My body’s gone cold and they want to get the heck out of Dodge before they catch the disease.

We try to be accommodating when it comes to making the single person feel comfortable but they’re still wary. It’s funny, because about eighteen months ago I was complaining from the other side of the looking glass. So this is what it’s like. Little things like hanging out with my involved or married friends and seeing them snuggle when I was just trying to have a good time bothered me. I took a personal affront to seeing my pals calling their girlfriend’s sickeningly sweet pet names like ‘my queen’, ‘honey’ and other euphemisms that can’t be repeated in a family friendly publication.

Now I can see that it wasn’t their fault. It’s a balancing act having your less civilized confidants over to meet the new sheriff in town. You’ve got a person on one end of the couch that you went club hopping with until four in the morning and threw lukewarm chili dogs at (and he still spends time with you) and a woman who lets you cut your toenails at the dinner table and somehow still thinks the world of you. Bringing those two worlds together is a real tight rope act. So occasionally, when your friend(s) upend a glass of good red wine on your new eight hundred dollar couch and keep walking, you flinch and wait to see what the other half does. Or when you’re offered up on a silver platter (without tranquilizers) to her entire extended family during one of the most stress-inducing holidays out of the year. There are little moments of introduction like that that no prayer to any god can help.

And some of my couple friends only want to do couple things now. Hopefully this is just a phase, and the boys can go off to be boys occasionally and the girls can shop or get their eyebrows waxed or whatever it is that groups of girls do when guys aren’t looking. It feels like growing up to some extent. A beautiful woman hosed me down, dressed me up, and turned me into a civilized, thoughtful, mild-mannered person who chews with his mouth closed and discusses drape schemes. At least that’s what our publicist has advised me to say in press releases.

Pureed but not whipped, 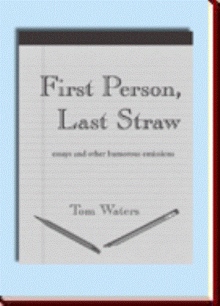 Critically lauded Buffalo humor writer Tom Waters sharpens his craft with essays to razor precision in his fourth published collection of wickedly subversive and laugh out loud rants, essays, and celebrity interviews. The author reloads his calculated wit on topics like babies, pornography, restaurants, relationships, driving, wrestling, coffee addiction, weight gain, psychotherapy, writers portrayed in film, the eroding laziness of our culture, drive-thrus, cooking, republicans, and the agony of shopping for clothes with women. The collection also reprints some of Tom’s most popular celebrity interviews with author Bret Easton Ellis, comic legends Mike Carey and Brian Azzarello and cult film director Lloyd Kaufman. Waters has enjoyed a rabid cult following among his fans and continues to shock, amuse, and offend with his no-nonsense brand of confrontational rants. Compared as a cross between Andy Rooney, Dennis Miller and Denis Leary, his angst-fueled nonfiction endures as a legacy to the Y generation, an amusing threat to baby boomers, and an inspiration to angry young men the world over. His books and articles have appeared in over four countries and have thus far sold thousands of copies. He’s performed his work on the radio, on stage, and in print for almost twenty years, garnering an award for humor from Columbia University and finding publication in The Buffalo News, ArtVoice, Night Life Magazine, Acid Logic, Film Fax, Too Much Coffee Man Magazine, and The Circle, among others. His last collection, First Person, Last Straw, was described as ’a jolting read’ (Anthony Violanti, Buffalo News) and 'a book that gives as much as it takes from you’ (Brian Bogucki, ArtVoice).

Tom Waters (31) lives, writes and mutters to himself in Buffalo, New York, where he has lived all of his life. In addition to the book you’re holding in your hand right now, he’s written three other books Born Pissed, Zany Hijinx, and First Person, Last Straw. He wants you to buy them all and re-read them aloud to your friends during slumber parties. He’s currently putting the finishing touches on his fifth book (Slapstick & Superego), starting on his sixth book, writing a weekly column for Night Life magazine (Big Words I Know By Heart), and spending entirely too much time updating his web site, ’Big Words I Know By Heart’ at www.tomfoolery4.wordpress.com. His articles, essays, rants and interviews have appeared in over four countries in print and online in publications such as ArtVoice, Night Life, The Buffalo News, Acid Logic, Too Much Coffee Man, Filmfax magazine, The Circle and The Beast. He’s been writing since the age of 13, and will most likely die with a notebook clutched in his tobacco stained fingers.