Back To The Blanket

A Native Narrative Of Discovery

by James A. Starkey, Jr. 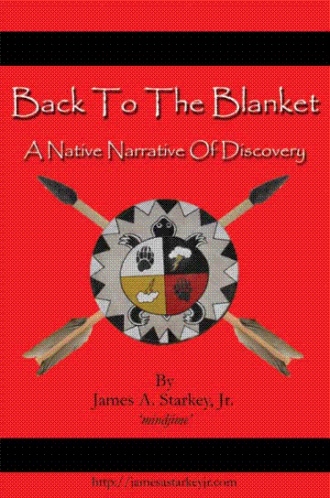 Darkness had fallen and the brightness of the new moon illuminated the village. Silvery shafts of light bounced off the lake as Inini sat patiently near the trail where Zhingos had earlier been swallowed up by the enormous trees. In the distance, he could see the celebrating that had continued on after he left. People were gathered around the fire, laughing and enjoying the company of one another, and their reflections danced in grotesque shadows off the white lodges that sat quietly in the dark like watchful owls. It was a compelling contrast: The sounds of the evening forest behind him quietly echoing the secrets of the night, and the distant revelry of the celebration that marked a new beginning for his son. Somehow, the Chief felt that he was caught between the pull of two worlds, each exerting an alluring force that carried with it its own frailties, its own blessings, and its own destiny. Deep in thought, Inini reflexively tugged at the corners of the Red Trade Blanket that hung from his hunched over shoulders attempting to ward off the night air that gently eased the temperature downward.

The Chief sat with his head down, his eyes closed, and he felt his body weave back and forth to the sound of the distant drum. The Blanket was pulled up around his head. Soon there was a firm hand on his shoulder.

“Noos! How long have you been here?”

“Not long, Ningoz. Come…let us sit awhile before we go back.”

Zhingos sat down close to his father and waited for him to speak. Inini continued to look at the night Sky in awe. He took a deep breath through his nose and then sighed. “There are no more beautiful nights than these that we have here at Summer Camp. The stars are clear, and the moon is radiant. The smells arouse the Soul. It has always given me a pleasing feeling inside to sit quietly and to silently give thanks for all that we have. I have been very fortunate to have a wonderful son like you, Ningoz. You have always amazed me at how quickly you have learned all the things that you have been taught. You have learned to hunt, to trap, to fish, and to be a disciplined Ojibwe man. I can only hope that your life will be as rewarding as mine has been. My life has been a simple one, but not easy. I have not asked for it to be any other way and would not want it to be any other way. It is as my father’s life was.”

Inini paused as he gazed at the Sky, where the stars fought to be seen through the brilliance of the moon. “I know that there are changes that are coming. No one knows what these changes will bring or how they will affect the People. Changes have always been the way of the Ojibweg. I am not worried about change. We are an adaptable People. But in the past, we have changed only when there has been good reason to do so!”

“What do you mean, Noos, good reason?” Zhingos pursued his father’s thoughts.

“Ever since last Fall when the three strangers visited our village, I have been more and more concerned with what the future holds. I watched the eyes of our People as Aayaanji’ displayed the goods that he brought from the trading post on the big lake to the North. He has filled their heads with ideas about things that we do not need. Things that they say will make our life easier. Do you remember, ina, that day?”

“Perhaps our life is as Gichi-Manidoo wants it. All I know is that when my father and I traveled North in earlier days, we would see the People there who had grown forgetful of our ways and unable to exist without the handouts of traders.”

Not since Alex Haley’s Roots has a story probed so deeply into the intimate details of an indigenous American family. Inspired by the events of this Native American author’s descendants, Back to the Blanket chronicles seven generations of his Ojibwe “roots.” But just as importantly, it places the events within the context of a tumultuous time in American History – a time when Western European Civilization was gaining enormous inroads in the and leaving in its wake a devastating clash of cultures.

But this story is not about typical Indian-White confrontations – bloody, violent, avaricious Indian battles. It reveals a more subtle, yet just as deleterious, subjugation of a people through the proliferation of White trade goods, overzealous missionaries, diseases for which there were no cures, and the most contemptible allurement of all – alcohol.

Back to the Blanket is a story of tragedy, guilt, pride, perseverance, hope and survival which begins in 1988 when the author undergoes a life-threatening bone marrow transplant for leukemia, a deadly blood disease. During the rigorous transplant procedures, he receives a powerful Native Vision, which begins to weave together the stories he has heard as a boy and his curiosity regarding his father’s tumultuous past. But it isn’t until six years later when he and his father are on a train trip bound for the White Earth Reservation in that the Vision returns to reveal his legacy and the Red Trade Blanket that has been handed down through the generations.

For the past 36 years, James A. Starkey, Jr. has been a successful English and Social Sciences teacher in . He is an enrolled member of the Minnesota Chippewa Tribe and has written two plays: The Spirit: An American Tragedy and Mourning Comes at Dawn, which earned for him the Valley Forge Teacher’s Medal. He has two adult children and lives in a suburb of with Janie, his wife of 39 years.