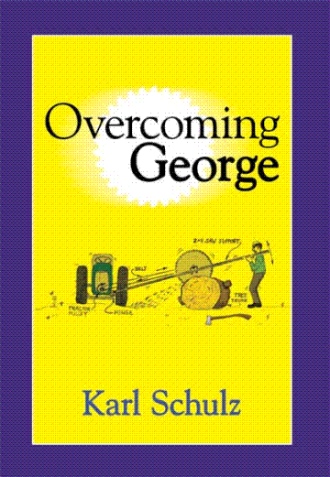 Because of having to work for George so much of the time, I missed many of the teenage experiences that my friends were enjoying and I really never did learn very many social skills or develop much self-confidence. I primarily worked on survival skills. I think those are still intact. While being a teenager, I tried to look cool but I am sure the façade was obvious.  On this house-building job I was only a grunt. I was not trusted to do anything important like saw wood, make measurements, make important decisions, etc. I shoveled trenches, dug and bricked up the cesspool, hammered and other repetitive tasks where I would not mess anything up very bad.

After this house was finished George put it one the market and it did not sell right away. I was in high school at the time and got myself suspended from school for two days for a stupid act. While walking down an outside hallway during class I let out sort of a catcall into a room where the door was open. The teacher came to the door and told me to come back, which I did not do. Just then, my favorite teacher, Mr. Cole, the metal shop teacher, happened to be coming from the other end of the hall. He had me go back to the teacher who wanted me and I was soon sent to the Vice Principal, Mr. Bergstrom. “Bergie” felt that the infraction of rules was severe enough to warrant a two-day suspension. George noticed that I was not going to school the following morning and I told him why after he asked me. He then told me to go over to the house and pull the weeds out of the front lawn. I got in my 1933 Ford, drove over there and pulled out several boxes of weeds which took a long time. He came home in the evening and told me “I thought that I told you to pull the weeds from the lawn”, implying that I never pulled any weeds at all. I said I did pull weeds. He said, “You did not”. I gave him a dirty look and started to walk away. He said, “Never look at me that way again”. As I walked from the living room into my bedroom I glanced back and gave him another dirty look. He promptly ran after me into my room and started to pound on me as I was lying on my bed. He was six foot tall and of medium build. I was five foot six or seven and weighted about one hundred thirty pounds at most. I was able to get up from the bed and began to run out the front door and down stairs. I yelled to him “you dumb son-of-a-bitch”. I had never said anything like that to him before. Like a shot, George took off running after me down the stairs, out the driveway and down the center of . I was terrified and happened to look back and saw that he was gaining on me. All of a sudden the mythical wings of Mercury must have attached themselves to my shoes and I took off running like I had never run before. George, the smoker, did not catch me, fortunately, or I am sure I would have paid dearly on the side of the road with many bumps and bruises and perhaps broken bones.

Panting heavily, I did not know what to do or where to go for the night. I had to have a place to sleep so I finally went to my friend Dick Ferris’s house on and asked if they would let me stay for the night. They said, “Yes”. The next day after I got up, I went back to the house to pull more weeds from the front yard. That afternoon George drove up in broad daylight and walked up to me on the front lawn and said “stand up and take it like a man”. I stood up and looked him in the eye, expecting the worse...

Growing up in during the Depression within a dysfunctional family controlled by a domineering stepfather was difficult. Here are a few topics:

1. George often bragged: “I got my first piece of ass when I was ten.”

2. Mom thought that it was good for me to see my dead friend lying in a casket. Wrong!

3. I would search the house for mom’s bottles of wine. When I found one, I poured her precious fluid down the drain.

4. As Jennie drove the station wagon, George ran his right hand all the way up her dress. This was very humiliating to me.

5. Three of my childhood friends lost their lives. My dad and one uncle committed suicide.

6. George put the 1938 Oldsmobile in low gear and rammed the big, chrome plated bumper into the right side of the parked car to cave it in.

7. Mom said that she saw George having sex with one of the burros.

8. I just hoped that my arms held out so that I would not drop the whirling "buzz" saw and cause it to shatter.

9. When my car hit the moving train, I was ejected and as I rolled through the weeds I said to myself “you’re dead, Buz.”

10. I lined the wall of the thirty-two foot deep cesspool with loose bricks while never using any safety equipment.

11. As I turned the steering wheel of the Model A to the left, the car landed on its right side. One guy’s head went partially through the cloth roof.

12. We were thirty miles away from the first hydrogen bomb blast. The heat and shock waves were intense.

13.  George shot himself in the heart. No one attended his funeral.

THERE IS MUCH MORE. READ ON

Karl “Buz”. Schulz grew up in the rural town of in a dysfunctional family controlled by, George, the domineering step father. His real father committed suicide when he was nine. His alcoholic mother offered little support or help when needed. He had no close family members to seek out for advice, guidance or help while growing up.

His step-dad, George, was a womanizer, hard worker, unhappy, a successful contractor but not a successful human. He loved animals (too much) and often showed his closeness to them rather than to humans. George required the author, as a boy, to work very hard too much of the time in building structures from houses, brick walls and doing yard work. During this time Mr. Schulz was constantly was reminded of his minimal worth and value as a human and worker. This acquired low self-esteem was very difficult to overcome.

Three of his childhood friends died from accidents.  One grandmother was married four times. His main outlets to sanity were through his many somewhat unconventional and unique adventures with his friends, animals and vehicles as well as fishing, swimming and making things.

Some of his many adventures were fixing up and driving an old Model “T” Ford, helping George to operate a dangerous “buzz” saw, running his car into a moving train, witnessing the first hydrogen bomb explosion, and running aground while on a destroyer.

He eventually spent four years in the navy, graduated with his master’s degree in industrial education as was a shop teacher for twenty three years. He is married, has a successful family and has traveled to over forty countries and presently lives in Homosassa, Florida.