Rhapsody in Junk: A Daughter's Return To Germany To Finish Her Father's Story 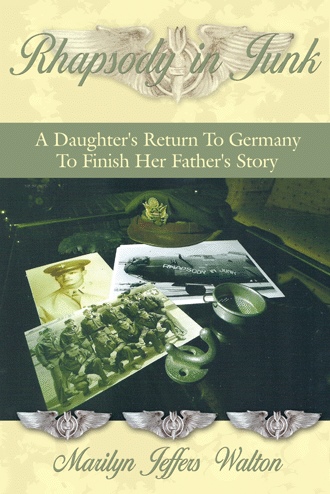 Brakes screeched in a symphony as pilots systematically released them. Planes lurched, and pungent clouds of blue smoke belched from their engines billowing forth to hover over the taxiway. The engines caught, and sputtering graduated to thunder. “Rhapsody in Junk’s” four weary engines bellowed as she lined up with the others behind the polka-dotted assembly plane which led the PFF plane upward.

All the planes from Horsham St. Faith that day were B-24s, designated as “heavies.” The darkness lifted by 4:30 a.m., and a partly cloudy morning shone through for take-off. By 7:32. a.m. the lead bomber of the 96th Combat Wing moved out. The hulking “Rhapsody in Junk” waited to swing around off the tarmac and onto the runway. She was eighth to take off in section one.

In turn, the plane pulled into position. In minutes, under Northrop’s control, the battered green plane would make the transition from bouncing all over the runway to drifting into the orderly formation where planes were staggered side to side and top to bottom. Once there, he would be alert to other planes in the wrong place in the formation. He would have to concentrate hard to keep his own plane from drifting, and like the squadron leaders, correct his position, which was made all the more difficult as he battled the prop wash of the other planes.

The frame shook as her slick tires, worn from far too many take-offs, clicked rapidly over the expansion joints of the runway past the red and blue marker lamps. With building speed vibrating her rivets against the ever-strengthening force of the wind, Northrop heaved the heavy into the sky. With an upward thrust, she was in the air lifting thirty tons of bombs, plane and men from the earth. Passing the control tower, “Rhapsody in Junk” was on her way. Behind her, twelve more planes in section two took their position in the macabre dance.

Northrop knew his job well, but it did not make it any easier. "Rhapsody" had seen too much combat action, and her engines had been revved up to their maximum peak so many times there was not much emergency power left in them. They would just barely permit Northrop to keep up with the formation as he kept them on maximum power.

The first plane leaving Horsham St. Faith that morning circled the field. Others fell in behind. Three at a time, planes moved off, and the pattern repeated itself as the continual line of planes corkscrewed upward into formation . . . . .

. . . . . . . . Up in the cockpit, Northrop understood the futility of their plight. He put the nose wheel down to surrender to the Germans, but beneath the smokescreen, they kept firing. Once down, he could not get the wheel back up, and it blocked the exit through the nose wheel hatch. He hit the bail out bell just outside the flak area. With just eighteen combat hours, the crew’s wings would be clipped, and they would spend the rest of the war on the ground as prisoners of war of the Third Reich. By the time the mission was concluded, Harold Flaugher would be dead. 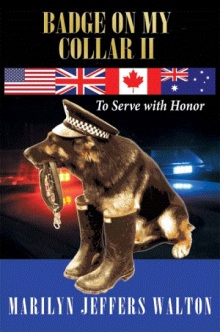 Badge on My Collar II: To Serve with Honor
Marilyn Jeffers Walton
$24.95 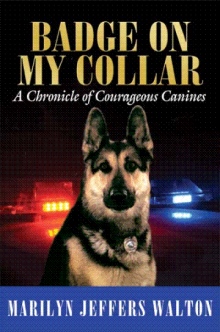 Badge on My Collar: A Chronicle of Courageous Canines
Marilyn Jeffers Walton
$24.95

This book is the culmination of three years of research in four countries. By meticulously combing the archive records in England, Germany, Poland and the United States, Marilyn Jeffers Walton has reconstructed the final mission of her father and his crew and located the German cemetery where one crewmate, killed the day the plane was shot down, was buried. She searched for and found the remaining men of the crew of "Rhapsody in Junk" and reunited them after sixty years. Interviews with the crew and fellow prisoners of war contributed puzzle pieces, put together bit by bit, that enabled her to find where they were captured and interrogated. By searching old records, letters, diaries and mission records, she was finally able to return to Germany and find the crash site of her father's B-24 where pieces of the plane still remained. To her astonishment, she met the woman who watched her father bail out and saw the very field where he landed. During her return to Germany, she connected emotionally with the people of the peaceful farm community of Wagersrott where her father was taken prisoner over six decades before. In her quest to reconstruct the mission and her father's prisoner of war experiences, Walton presents not only his story but the stories of the British and German people who both suffered greatly, all caught up in the dictates of a mad man. Revealed within the pages is a first-hand account of the bombing of Dresden from a German couple who survived it.  Walton's odyssey through Europe allowed her to discover the rich fabric of the people who endured and survived the war and to weave their stories into a multi-faceted mosaic that reflects the personal experiences of World War II.

Marilyn Walton. is a graduate of The Ohio State University. She has written six books for children, including the successful Celebration Series for Raintree-Steck-Vaughn. Her book, Chameleons’ Rainbow, won a Children’s Choice award in 1986. She and her husband, a retired professor, raised three sons in , where they currently reside. After locating her father’s crew and their relatives, she was instrumental in finding the crew families of the B-24, “Belle of Boston,” that crashed in in 1944. She currently conducts World War II research to assist other families in learning the history of their fathers’ war experiences and in finding relatives of the crews. With 78,000 American World War II men missing in action, of which 38,000 are considered recoverable, she works with other researchers trying to locate the remains of these men so that they can finally be brought home.