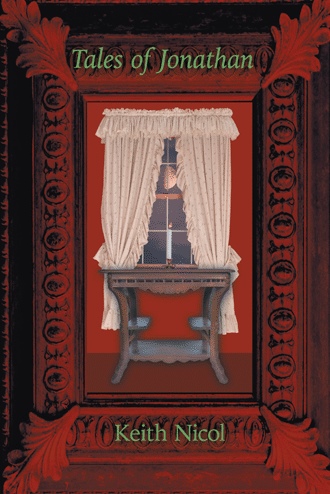 Alone I stepped out where snowflakes touched my face, like feathers or like gentle fingers, in their silent flight. The concrete steps were covered; I descended them with care, kicking away false edges to find firm footing.

Once he built a snowman beside the shed. He built it before I woke; when I looked from my window, the snowman looked up at me. I dressed and rushed out laughing. He smiled with his mouth of pebbles.

“What was your name?” I asked.

“It was Jack: you called me Uncle Jack. Do you not remember Uncle Jack?”

I stood beside him at the shed door, watching the mountain peaks, amber in the fierce light, bleeding their caps of ice to cascade in raging torrents to the lake. The movement of the water and the creeping shadows across its uncertain lights, created forms which I saw differently. I turned to speak and watched his absence approach; he locked the garden gate and followed his path across the moor, melting in devouring mist and in my memory.

When first sparks of spring kindled pale flames, flickering on spangled snow and licking at my window, he stood at the foot of my bed as I woke, a shadow of white on the melting night. I knew then, uncoiling from my dreams, that his surrender was no death, that his flesh dripping on my floor was the tears of no parting but of transfiguration: such warmth emanated from ice, such gentleness from the scalding bite of its edge. I stooped to gather up the pebbles and they melted in my grasp. Ever since I have seen him, I see him still in the swirling snow and in the darkness, in the everlasting summer that came between and in the silence and in the thunder of the flock. His smile has faded. I have a place marked out: he will not be forgotten.

Following the advice of his English teacher, Paul Garner uses his part in a school play to embark upon a journey of discovery. By attempting to rewrite and redirect the story, he finds that his quest assumes reality. Not only do the characters escape direction by his pen but he loses distinction between himself, as author, and the character he plays. He becomes lost within the narrative, which moves in ways not of his choosing. However, the bond between him and the one he seeks is never broken. Whether from dream and memory, part of reality or the image of a goddess, she is always the inspiration for the play. Yet where did the play originate? Jonathan is an orphan; whether he be the dead foster brother of Bethany, the imaginary friend of Daniel or the fostered child of the reclusive Aunt Sheelagh, his tales transform loss into a search for love in all worlds and beyond. Tales of Jonathan is a self exploration of one person’s mind, culminating in his discovery of truth in the deepest chamber. By transcending the restrictions of rationality, he finds a new reality. Dreams which have no end are no longer dreams. His previous loss and grief have become the fiction; the tales of Jonathan are now his reality. It is a story about the power of faith and love. I believe that with reflective thought, the reader will find it a challenging and rewarding book. Nicol addresses the slippery substance of reality from every angle, repeating the main story and many of its key phrases in slightly different contexts each time. While the intellectual exercise is fascinating, it is easy to lose the thread of the story in all of the rearranging, which makes for some challenging reading. --CLARION As Nicol invites readers into dreams and memories cobbled into a Möbius strip, there’s little sense of what’s real and what’s not. The first of seven segments suggests that the novel will concern schoolboy Paul Garner and the enchanting Bethany Dean, who tragically dies young. --KIRKUS There is a certain charm to Nicol’s prose, and he captures difficult emotions (grief, awe, adoration) with notable skill. --BLUEINK

The author was born in 1946 in and brought up in Hampshire.  He studied medicine at King's College and , .  He worked mainly in general practice until 2004 when he retired from medicine,allowing him to devote more time to creative writing.  Although writing for pleasure and exploration has always been an important pastime for him, Tales of Jonathan is his first publication.  Keith Nicol lives with his wife and family in .