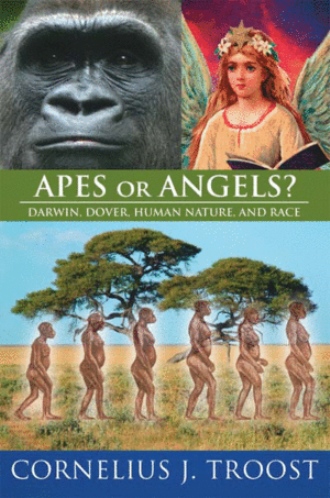 The title of this book alludes to the looming issue of human nature that was placed before the world by Darwin’s two books, The Origin and TheDescent of Man. I will give the reader a brief taste of Darwin’s life and his famous voyage on the Beagle, followed by a discussion of his work and his legacy.Little discussed in politically correct America is Darwin’s view of Homo sapiens in the form of at least four distinct subspecies.For Darwin it was easy to see that these subspecies were not equal but were all human and worthy of respect. In America Darwin gained acceptance only slowly, but it was in America that his theory was updated and strengthened by three American biologists and called the neo-Darwinian synthesis. Despite general acceptance by scientists everywhere, evolution was opposed by creationists who chose the school biology program to draw a line in the sand. I will discuss the defeat of creationism as intelligent design in the Dover “Scopes” Trial of 2005. Finally, scientific progress now enables us to decide between “apes or angels.”Among the world’s leading democracies, neo-Darwinism is accepted by more than 50 percent of the population-except in the U.S.. Europe now has risen to over 75 percent across its region.Regardless of their biological knowledge, Europeans accept secular values and neo-Darwinism.Europeans do not feel less human for having ape ancestors in their lineage.They have, however, largely given up the idea that Heaven awaits their alleged souls. Human nature is not fully understood but its genetic foundation is under intense analysis by armies of researchers either bent on pure science or medical breakthroughs.The neuroscientist Gerald Edelman, who sees the brain as a Darwinian mechanism, has a model that will greatly enhance our understanding of brain operation as it is verified by further research.20 Edelman believes that robots will “ape” many human traits without ever becoming fully human. Others,however, are not so sure! It would be supremely ironic if the Christian fear of ape ancestry was displaced by a greater fear of robotic human nature. Darwin’s discovery of our “apeness” is now a simple fact of zoological taxonomy which provides a foundation for further speculation.Our quest now is to understand the genetic basis for mind, belief, and personality.Genes somehow build our brains and make us uniquely human, a form of ape whose brains are in some respects qualitatively superior to those of all other creatures.Buried beneath sublime poetry, music, or mathematical cerebration is the older ape of our ancestry, but angels are now seen for the fantastical fabrications they always were.We may turn out to be automatons but the vast complexity of our brains will protect our egos. We have ignorance and self-deception as means of escape from reality anyway. Darwin never found “progress” in nature. Whatever man created culturally, he was first and foremost an animal that belonged to nature.“Free will,” the darling of leftist humanism, derives originally from Christianity, its primary enemy. Thus, as John Gray argues, humanists grasp at free will and progress as central dogmas while much of Christianity retreats to the margins with more doubt than their humanist cousins.21 Learning to live with nature may be far wiser than our current “conquest” which is upsetting global climate patterns and destroying many existing species. Liberal humanism is engaged in human emancipation similar to the Christian project of mortal redemption.History may have no ultimate purpose but liberalism is satisfied with its “Heaven on Earth” equality project. Liberals dream of a global civilization of equals that demands the diminution of Western power.By empowering the weak and poor, they hope to create their egalitarian paradise.Religions, however, are a formidable obstacle to such a project, for they differ in significant ways. Liberalism fails miserably in its belief that Muslims will become reasonable and peaceful once they shed their poverty. Today’s virulent extremists awaiting 72 virgins in paradise are usually highly educated and absolutely uncompromising.Unless they are protected from themselves,liberals, using reason and relative values, will be devoured by the increasing hordes of radical Islamists whose version of paradise is viewed as vastly superior. While we can thank Darwin for identifying our family tree and disabusing us of our wishful thinking, we are less certain of his revelations of human diversity. As modern genetics increasingly supports Darwin’s observations on human variability, the West is embroiled in a political war over the interpretation and meaning of these findings.Secular humanism, set adrift from Christianity in part because of Darwin, now opposes the facts of human inequality first pointed out in 1871 by the great naturalist. As in Galileo’s day, science is under siege for discovering uncomfortable truths.Popes are no longer the enemy, but doctrinaire liberals within the scientific community are! Darwin, the immortal hero of science, gave us ideas that offend both sides in the culture wars.

For many readers this book will be a mind-altering experience. It has a thesis that is a challenge to the conventional thinking of most Christians and their counterparts, the secular humanists. It offends both for very good reasons. It speaks the truth about Darwin’s views on human origins and race.

Contrary to the beliefs of most academicians and educated readers, Darwin had two dangerous ideas instead of one. Daniel Dennett was perfectly right about the first, which was the notion that  natural selection operated in a way that precluded explanatory intrusions from outside the natural world. In other words, metaphysics has no place in biological explanation. Things spiritual, like vitalism and finalism, are simply inapplicable to evolutionary biology. The second idea is rarely mentioned in politically correct America- that the human races are different in sometimes significant ways. Indeed, inequality is a normal condition of nature.

Darwin’s clash with Christianity is winding down because modern science is a foundation of western culture and it fully accepts the truth of natural selection and the evolution  of life(including man). It is ironic that as the struggle with Christianity declines, a new struggle emerges- the battle over racial differences. Liberalism evolved into radical egalitarianism as it swept over America, creating an authoritarian political correctness that contradicts our Constitution. Modern genetics now threatens the liberal myth of human equality.

These Darwinian conflicts are playing out amidst our culture wars, a battle that could transform us into another Brazil. Radical egalitarianism and multiculturalism are ideologies aimed at dismantling our great Anglo-European tradition. Forces of erosion are at work which may make our nation’s greatness a faint memory.

The battle with creationism is essentially over in Europe and it is winding down in the U.S. Science always wins fights over the facts of nature! Eddies of ignorance will persist in American society where fundamentalism exists, but educated elites have long since agreed with Darwin.

Liberal relativism erodes our standards of excellence and even undermines our Christian morality, a morality that seems closely connected to our moral instinct. With their power in academia liberals will submit to “white guilt” as they treat blacks as eternal victims, distorting reality to make outcomes equal. Darwin, however, may be vindicated on the matter of real racial differences, causing agony among idealistic liberals who must relinquish their lofty dreams.

Scientific humanism has always touted critical thinking as a supreme goal of education, but it is threatened by the irrational side of liberalism that savors post-modern subjectivism. Today we see “diversity training” imposed on  young people in a Stalinist manner. Propaganda and groupthink are current weapons of the PC martinets. In reading  this survey of how Darwin came to his dangerous ideas, you may appreciate how important science and critical thinking are in a society gripped by wayward versions of liberalism.

Open debate over this book will be a healthy antidote for the fearful silence in America.

I hope you engage in this debate and send me any comments or criticisms at Njtjrt@aol.com

Cornelius J. Troost was a professor of science education at UCLA and chair of graduate studies at Brock U. in Ontario, Canada. While at Brock Dr. Troost created an MA degree program and worked on critical thinking tests for the Ontario Institute for Studies in Education. Dr. Troost is the author of 10 books and numerous articles in professional journals. In addition he gave four major talks to the faculty and graduate students at Harvard's GSE.These talks were judged by senior professors as exceptional. For years Dr. Troost gave talks about evolution in education and appeared on a variety of TV programs to discuss creationism and biology teaching. In Florida he has taught biology, physics, and chemistry as well as graduate level psychology courses.His students in Odyssey of the Mind competitions won numerous medals. He is married and has four children and five grandchildren.