IT’S ALL IN YOUR HEAD 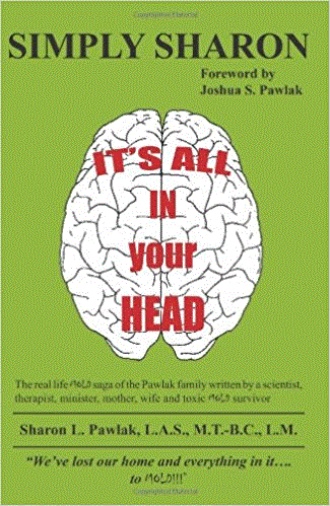 The Other Side of the Miracle

…. A “new” drug had arrived on the market and the doctor was convinced it would help my pain. There was one concern however; it appears that this drug had been known to cause strokes when it first came out. The doctor assured me that “now that it has been out awhile,” I would be fine. After returning home, I spoke with my husband Mark about it and we began to pray for direction about this alleged migraine reliever. A few days later, Mark came to me and asked me to please not take it. He had a dream that I took it and died. I laughed at him and said that was silly however deep inside, I wondered, was God speaking to Mark in this dream?.......

…..When the doctor told me I would have to radically change our diet, move out of our house and take the necessary precautions to minimize her exposure to perfumes, cologne, hair spray, certain shampoos and other harmful chemicals, I said “WHAT”?!!! I was in shock! I felt like I was in a surreal nightmare and I would wake up at any moment in a cold sweat. However, the nightmare would become worse. I began to hear whisperings of how my wife was having a nervous breakdown, she didn’t really have a stroke! “Allergic to chemicals, how far fetched!” Even so- called reputable doctors told her that it was “all in her head”….

…Interestingly, my diagnoses included the following: allergic rhinosinusitis, chemical exposure, food sensitivities, inhalant sensitivities, migraine, myalsia myofibrositis, seizures, vasculitis, possible mineral deficiency, stroke, T.I.A.’s, enlarged spleen, skin rash, abscessed lymph node, h. pylori, Candida, hiatel hernia, digestion issues and inability to conceive. One doctor even suspected MS. Many of you have similar ailments which may very well be related to the condition of your home. Most of us are living with moisture problems that we simply do not address and yet these moisture issues directly impact our indoor air quality. The EPA warns us that most disease is related to our indoor air. Good indoor air quality is certainly vital to our health and general well being. Moisture problems must not be simply tolerated…

From the harrowing journal notes of a suffering woman in the throes of mold/mycotoxins injustice, comes the real life mold saga of the Pawlak family. A courageous, God fearing family of four finds themselves crossing over from home owners to homeless, the week our nation was bombed due to what TIME magazine called the” Biblical plague of the century”, MOLD! Come peer into the life of a family that lost it all, their home, personal belongings, finances, jobs, friends and almost their lives.

Mold victims, survivors and ultimately emerging as a more than conquerors family, IT’S ALL IN YOUR HEAD brings to life the painful realism of toxic injury due to mold /mycotoxin exposure as well as addressing the social stigma of the horrendous myth that mold is nontoxic.

IT’S ALL IN YOUR HEAD resonates with passion, inspiration and a spirit of determination to hang onto your healing and each other and watch something incredibly AWESOME come out of something horribly wrong.

This book will challenge your thinking and perhaps you will no longer think, “It’s all in your head!” Great resource section for: Multiple Chemical Sensitivity/Environmental Illness, mold toxicity, chemical toxicity, healthy homes, physician referrals, much more!

Simply is Sharon L. Pawlak, L.A.S., M.T.-B.C., L.M., Laboratory Animal Scientist, Music Therapist Board Certified, Licensed Minister and National Seminar Leader. Sharon was born in Delhi, NY, growing up on a beautiful farm in the . A graduate of both Delhi Agricultural and Technical College in Veterinary Science Technology as well as Fredonia State School of Music in Music Therapy, Sharon has a unique perspective as a "farm girl", scientist, seasoned therapist and musician. She has survived epilepsy, stroke, ovarian/thyroid tumors and severe Multiple Chemical Sensitivity/Environmental Illness. In 2001, “retired” her private practice and moved to .

She became a licensed minister in 2002 and avidly writes, desiring to help heal the masses, in mind, body and spirit!