Art and Beauty in the Heartland 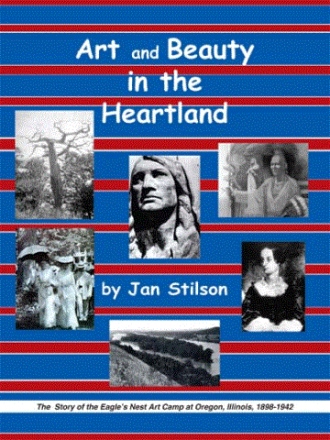 When Lorado Taft and his friends of “The Little Room” traveled from Chicago to the small town of Oregon, Illinois, the summer of 1898, they were the invited guests of Wallace Heckman and his wife. The small group anticipated their adventure at  “Ganymede,” Heckman’s estate, as they hoped they would find a site nearby which could be suitable for their summer homes.

The Heckman estate was located on top of the east bluff overlooking the Rock River that was forested and cool. Heckman had purchased this land a few years earlier for his own summer retreat from Chicago.

He was an attorney who would eventually become the business manager of the newly established University of Chicago. The Heckmans probably did not know the artists they were to entertain for the holiday but they came highly recommended by their friend and neighbor, James Spencer Dickerson.

Mr. Dickerson was editor of the Baptist magazine, The Standard, and would soon leave that post to be Secretary to the University of Chicago. Mr. Dickerson followed the careers of the artists and favorably reviewed their exhibits in various art journals. His writings provided a valuable service to art patrons in the Midwest by keeping them informed, and promoted the careers of the artists as well.

The artists had escaped to Bass Lake in Indiana each summer the previous two years. Relatives of “Charlie” Mulligan, a sculptor associate of Taft, owned this particular site. However, in 1897, an outbreak of malaria caused quite a scare among them, and they determined to relocate if possible.1 Taft was concerned about this because he had experienced the horrors of malaria when he contracted it in 1879 as a teenager. He and his father, Don Carlos Taft, were traveling in Honduras at the time the illness struck young Lorado.2

The artists arrived in Oregon the evening of July 1, 1898, on the nine p.m. Burlington train. Heckman met them at the depot in his carriage and by ten o’clock the group pulled up in front of the “Ganymede” mansion, having traveled four miles.

Lorado Taft and several artist friends from Chicago joined together to form an art association at Oregon, Illinois in 1898. They called it Eagle’s Nest. They referred to it as camp, for in the early years camping was their principle lifestyle. This “camp: lasted for forty-four years, providing enrichment for the artists and for the residents of little Oregon who always enjoyed having the artists come to town.

The artists worked and relaxed at camp. They also reached out to small towns to teach folks about art appreciation. Midwestern residents were hardy country folk who didn’t pay much attention to details of beauty. There were no parks, no public monuments, and often people did not even notice a beautiful sunset.

The artists at Eagle’s Nest Camp spread the message of beauty in each hometown, school, Women’s club, art group or community function they attended. Simply put, they were art missionaries.

By teaching appreciation of beauty, they started a trend in community betterment and beautification that caught the imagination of the people, the patrons of art, and the Governor of Illinois, Frank O. Lowden, a resident at Oregon.

Within these pages are the letters of Dwight Perkins to his wife about life at camp, the stories of Hamlin Garland’s romance with Zulime Taft; the mischievous antics of little Charlie Browne, the joys and sorrows of Lorado Taft as he promoted art in Chicago and elsewhere, the building of the monolithic statue, “Black Hawk” on the banks of the Rock River, a review of the Black Hawk War, and the story of Margaret Fuller who so greatly influenced the artists. And more, much more.

Jan Stilson resides in Oregon, Illinois, her hometown. She is a world traveler, and she thinks the beauty of the Rock River equals that of any other place on earth. Jan has lived and worked in the valley all her life. As librarian of the Lorado Taft Field Campus of Northern Illinois University at Oregon a few years back, she became acquainted with the stories of the artists and their families who used to live on that site. This sparked her interest of telling the story of life at camp.

To accomplish the research for the book, she traveled to the east coast of the U.S. to meet with several family members of Lorado Taft, the leading spirit of the Eagle’s Nest Camp.

She holds degrees in theology, social science and library science. She has spent many hours in writing and rewriting this book.

Jan is married to her wonderful and patient husband, Gene, and they are parents of three grown children, and grandparents of three. Her interests include church, library work, historical research and writing, traveling and spending time with family and friends.