REFLECTIONS ON A HEROIC JOURNEY 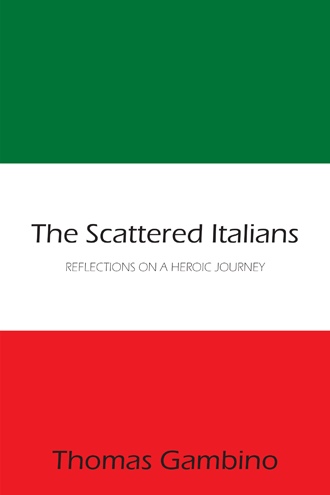 Our literary voyage, which takes place over two millennia, is aimed at arriving at conclusions that will go far in explaining who we are as scattered Italians, and why we act out life’s drama as we do. We will be in the company of some of the titans of history, along with the beloved people of the Gambino and Sparacino families, to whom I belong. We shall experience firsthand how we overcame fate’s erratic and perverse inconsistencies, which culminated in an extraordinary cultural and historical upheaval; the forced migration of the Italian people.

During the latter period of the 1800s through to the early 1900s, was set upon by enormous catastrophes that were the result of mankind’s folly. The outcome affected an entire nation, as well as the world at large, causing a Diaspora, or a scattering abroad of the Italian people and their descendants. Few were fortunate enough to return to reclaim the resulting lost identity and citizenship. Our story touches all of us, for we all seek, at one time or another, our true persona during life’s journey.

We in the West are the recipients of a common civilization, much of it bequeathed to us by . Think of it; many of the laws we live by, much of the music, art, poetry and food we enjoy, myriad scientific achievements, and many of the languages we speak originated from this divine peninsula surrounded by the azure . The , as well as the consequences of the Renaissance, continues to define our common inheritance and influence our daily lives. Consider that a large percentage of the English language, the present lingua franca, originated from Latin, our great mother tongue.* Our people discovered the !

I am truly challenged by the task of recounting this tale objectively, as I am Italian, and therefore I confess that I am particularly subject to ’s many charms.

“The Scattered Italians”, is an impressively deep and revealing book, filled with the gusto and a love of life which permeates the core issues of discovering one’s roots and thus one’s true identity. This nonfiction book interlaces historical factors with behavioral characteristics leading to conclusions and answers affecting over 25 million Italian-Americans and potentially many other hyphenated citizens of the world. The story is presented in the author’s delightful and often witty style allowing for a pleasant, informative and entertaining read. The literary visits with some of the giants of history, along with personal anecdotes, mix to provide a fascinating story on a very humane stage for all to see and enjoy.

Thomas Gambino was part of the airline industry for over 34 years working his way through the ranks to become a senior director for a major carrier in Europe. His extensive travels, for both business and pleasure, have given him an international perspective which he shares with the reader in telling this significant tale.