Near A Far Sea 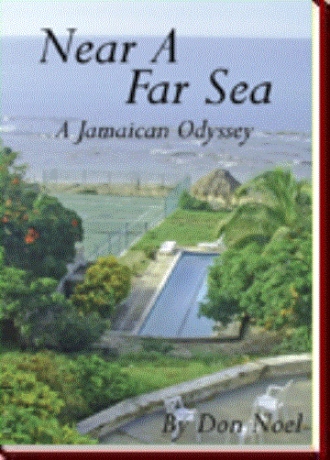 Blasting a wider reef opening was Mister Arthur’s idea. He talked about it with me, but more important, with our friend Bob Satter, one of the first to vacation at our house. Bob, a trustee of a small foundation -- by a charming coincidence, the Cottonwood Foundation -- arranged a $500 gift.

I brought the money in February 1973, and deposited it – lodged it, we say -- in the Black River bank account of the Calabash Bay Fishermen’s Co-op. It was a suitable non-profit recipient, and we hoped to encourage more Billy’s Bay men to join.

Five hundred dollars wasn’t enough to do the job. Mister Arthur and I agreed that a project vital to everyone’s livelihood shouldn’t depend on American beneficence; he soon matched the grant, setting a “suggested contribution” for every captain, crew member and fish buyer. A persuasive man, he got close to 100 percent participation, and even cudgeled some out of a hardware store owner with whom some captains traded.

As we left after our ten-day vacation, we could hard wait to see the changes that would greet us on our next visit.

Six months later, we arrived to find . . . no progress!

’s coastal-protection agency had to approve any change in the reef – admirable environmentalism in a developing country, but prey to “soon come” bureaucratic lethargy. The men had become impatient and insisted that Mister Arthur give back their money. Little wonder: Many had put up half a week’s catch. This is not a society with money to spare for distant goals.

Sunday I drove to see Ted Tatham, a great bear of a man, Britishborn, now a Jamaican citizen, whom we’d first met through my father’s connection to Alcan Aluminium. Alcan had loaned Ted to the government to run a farm development project; he had connections, Mister Arthur said. Ted was weekending at his house two miles from us. Come up to Mandeville, he said.

Monday I set out for his office, an hour’s drive into the mountains, leaving the dauntless Mister Arthur the task of re-collecting money.

Ted put in a call to , to the man who oversaw the coastal-protection agency, pleading urgency. He covered the mouthpiece: “He wants to know who the blaster is.”

I had no idea; Mister Arthur had arranged that through Bunny Delapenha, another Mandeville man with a weekend place.

Telephones were scarce; it would be 20 years before we had one at . Ted, heading a government project, had not one, but two. “Call Bunny,” he said, covering the mouthpiece. He thumbed the all-Jamaica phone book – less than a quarter as thick as ours at home in Hartford -- found the number, and went back to prolong his conversation with the agency head while I reached Bunny. Blessedly, he was “in office,” as Jamaicans say.

“Ashmead,” Bunny said, a man who’d dynamited a commercial-building foundation for him. I whispered the name to Ted.

“Has he dynamited a reef before?” I relayed the question. “Oh yes,” said Bunny, “he’s an experienced sea-blaster.” He said it “seablahster”. seemed satisfied. A man would be down in a day or two to inspect the project and sign off . Bunny would send Ashmead down to start the job while I was still there. I thanked Ted and drove back to Billy’s Bay in time for a quick dip -- a sea-bath, we call it, said “sea-bahth”.

The agency man came as promised; Mister Arthur took him to inspect the harbor reef. He pronounced the project acceptable so long as we enlarged the opening not more than another six feet, lest a wider opening suck the sandy bottom out of the cove. We readily agreed; that would be plenty of leeway for captains to get through without mashing up their boats. We could start work; the paperwork could follow.

What Frances Mayes did for , Don Noel has done for .

In 1966, he and his wife discovered, on the island’s , an unspoiled, out-of-the-way village where most residents make their living fishing on the Pedro Bank 50 miles off shore – “far sea,” as the fishermen call it.

They built a beachfront house, embellishing it over the years with a tennis court, a swimming pool and other improvements - and fending off roaming goats to establish lush plantings of tropical flowers and trees. They got to know their neighbors, and found ways to be helpful.

Near a Far Sea is the often-comic story of coping with a bureaucracy and an unsophisticated labor force to make it all happen.

But it’s a story that focuses on the village neighbors – thumbnail character studies that illuminate the life of a Jamaican fishing village. The subtext includes commentaries on British colonialism and attitudes about race, and notes on tropical trees and fruits, flowers, farmers’ markets, birds, the Jamaican fishery, education and more.

It’s a book that will engage you by the colorful folk who populate it.

Don Noel is retired from a prize-winning career in television and newspaper journalism that earned him a place in Who’s Who in .  He and his wife, Elizabeth Brad Noel, live in an African-American and Jamaican neighborhood in , and have been deeply involved as volunteers addressing urban issues for four decades; he now is chair of the ACLU of Connecticut.  They take delight in sharing their island hideaway with their daughter Emily, her husband Tim and their seven-year-old grandson “TJ”.