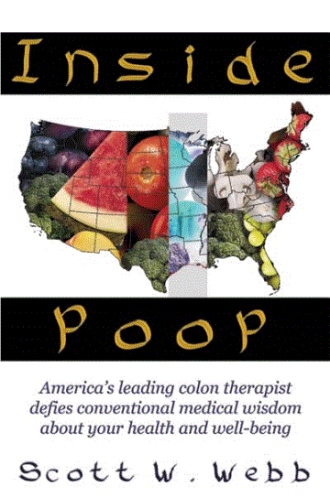 Do you really want to be normal?

When I first became a colon hygienist, I was shocked by the tremendous volume of rotten fecal matter coming out from a typical person.  The average release during a cleansing session is three to five feet long.  On the extreme end I’ve seen solid pieces totaling ten feet removed and once witnessed 15 feet of fecal-mess flood from a skinny woman weighing ninety pounds.

One client released 40 feet of fecal matter over the course of five weekly sessions during a two-month juice fast.  When she first came it had been three weeks since she had eaten food and eight feet of clay-like poop came out.  It left us speechless each successive colonic as we saw eight feet of poop exit weekly (while eating no solid food).

I asked myself, “Is this normal?  Does this huge volume of inner poop explain why Americans have generally become so ill and dependent on drugs?”  I mean drugs for chronic pain, drugs to fall asleep, for depression, sex enhancing drugs, anti-bloating drugs -- you name it.  Since I am naturally curious, I began investigating what might cause fecal matter to be held in the gut.  Then everywhere I looked, I found answers.

“Does this huge volume of inner poop explain why Americans have generally become so ill and dependent on drugs?”

The starting point, for me, was to ask:  “What happens when people start eliminating this excessive fecal matter?”  My observation has been that they got better -- feel better, look better, see positive results.  Most curious to me has been the total ignorance and denial of this reality by the American medical system.

So we are looking at a health topic filled with curiosities.

My goal in writing this book is to make something perfectly clear -- is in danger from an evil within.  This inner sludge is torturing and killing people now.  All the military forces in the world cannot protect us from it.  Whoever was supposed to protect us has gone to sleep.  Our best watchdog has become retarded, chasing its own tail.

Try to eat healthy and you can’t.  Most salmon ordered in a restaurant today provides no health benefits.  Each bite sliced from a slab of gray protein dyed pink is from an animal fed on a diet of antibiotic-laden pellets swimming in a cramped sea water pen.  You are too good for that, my friend.  Let the other guy or gal eat it while you escape out the back door.

To be wealthy and lose your health seems almost an impossibility, but it’s so common that it’s become status quo in .  Prosperity should mean function and pleasure without reaching for a pill bottle.  So let the other guy eat all that bacon, fries, food-to-go on a bun, and cellophane-wrapped cakes.  Chicken raised in a crowded concentration camp isn’t fit for consumption either.  Deep down you know it’s true.

A friend said the other day, “Isn’t it awesome that you can get a walnut and apple salad from the drive-thru?”  “Yeah,” I replied, “If you enjoy eating anti-browning chemicals, preservative waxes, and artificial flavors.”  You know the fast food industry prides itself on uniformity while apples are anything but uniform in taste.  My guess is that apple salad comes laced with a powdered “apple-fresh” flavoring that’s murder on the human liver.

“This book kept me reading all night.  I couldn’t put it down!”  -- Brad DeMeulenaere

“I had my first colonic at age 26.  I am now 56 and have seen a total of five colon hygienists, four within the past six years.  I’ve been through the forest of medical doctors and many different alternative health practitioners.

Much of the time, I have sensed a frustration from them.  Sometimes it’s a frustration that they can’t figure out how to help me and sometimes it feels like a cumulative frustration from all the others they haven’t been able to help.  But sometimes I feel that their frustration is directed to me personally, as if they wished I would just get myself together and “feel better.”  Lord knows, I haven’t always made the best choices for my health.

When I saw Scott Webb, I felt a lack of that frustration and no hint of blame.  It was evident to me that he saw the big picture and how we have been affected by our culture.  Scott’s message was truly one of hope which brought me a sense of relief and peace.  That is definitely a place where healing can begin, when you feel no blame, just peace and hope.”  -- Victoria Lovett

One of ’s leading colonic therapists gives you the inside scoop on digestive disorders that you or a loved one might be experiencing.  Learn how to:

Scott W. Webb dares to defy conventional wisdom about health and proves beyond a shadow of a doubt that he knows the “inside poop” about many secrets you have not heard yet -- until now!

Scott W. Webb has a bachelor’s degree in philosophy from in .  He has been a licensed massage therapist since 1998 and for the past five years has built a thriving private practice as a colon hygienist.  He lives with his two teenagers in .