In The Presence of Our Enemies 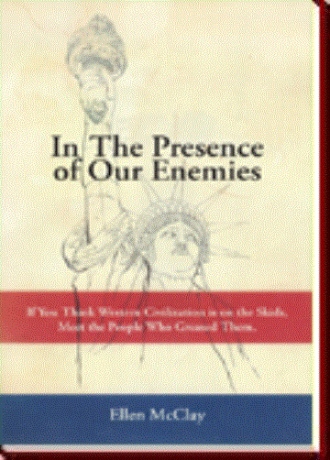 "UNESCO''s First Director-General, Julian Huxley was grandson to Thomas Huxley, the man who coined the word "agnostic: to describe his own unbelief.

"What is vital," said Julian, "is to transform the structure of society and the spirit of education together." (pg. 142)

"In the Presence of Our Enemies is more than just a book about UNESCO. It''s an expose'' about the destruction of our society."

"Ellen McClay is one of America''s last true originals—a woman who thinks as brilliantly as she lives, who writes as compellingly as she talks, and who can explain from years of study how America has become so degraded."

In the Presence of Our Enemies has been meticulously researched, containing facts from years of Congressional investigations, as well as authoritative books written by historians and participants alike of the 20    Century''''s assault on the unique form of government fashioned through, as George Washington described, "a miracle at Philadelphia." To achieve this destruction and planned replacement with a socialist society amalgamated into a global government, it is first necessary to destroy traditional morality, a campaign conducted through every avenue of communication, with particular focus on textbooks and schools. Their legacy marches relentlessly onward.

Meet the sociologists, the psychiatrists, the ''''educators,'''' moral degenerates, who banded together from countries around the world focusing on the redistribution of American wealth, and changing the culture which gave them birth. They gained entry into American Schools, colleges, legislative halls, and their descendants still promote a Fabian Socialist World  Society supported by American taxes. Nothing has changed since Soviet leader Nikta Khrushchev in 1957, told us what was planned:

Ellen McClay, writer and researcher, now living in , devoted years to elements of the so-called "cold war." She was a popular speaker and sought-after lecturer on radio and television. Some of her school years were in the Boston area, during an era redolent with the traditions of the Pilgrims, the Liberty Tree, the Boston Tea Party, the battle of Bunker Hill, the ''shot fired heard round the world.'' Inspired by these historical events, for a number of years she wrote monthly legislative analyses, appearing before legislative bodies: local, state and national. She maintains the rewriting of American textbooks which eliminate the truth of U. S. history plus the promotion of "progressive education," the painting of the United States as the "great Satan," were important and too often overlooked elements of the war against Western civilization.

Professionally, she served in management positions over more than twenty years in the health food industry, while also associate editor of a health food magazine, contributing feature stories, as well as a regular column, Along the Bumpy Road to Health, plus freelance articles in other magazines. Writing and narrating a TV series locally with a focus on UNESCO, prompted the writing of In the Presence of Our Enemies, her second book.