The Marines, the Massachusetts Senate and Managing Associations 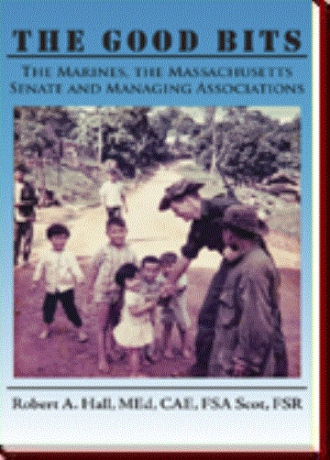 I wasn''t feeling all that bad, considering where I was and why I was there. Of course I was hungry—the IV in my arm didn''t help much. Neither did the post-op throbbing. Still, it had been three days since the chopper pulled me out of Khe Sanh, in the northern corner of , and two since I came out of surgery.

I was feeling a bit lonely, as no one was close to me that night in the Da Nang Navy hospital, so I was glad to see a chaplain approaching. His eyes swept my blanket-clad body from my pained smile to where the blanket dropped flat just below my knees. He sat.

"How are you feeling, son?"

What does a hard-corps, twenty-year-old Marine say? "Fine, Padre. I''ll be back in the field with my outfit in two weeks!"

He passed over that bit of bravado to ask what unit I was with.

There followed the usual chitchat: my name, where I was from, family and so on. We were discussing my younger brothers when, growing restless, I stretched out my legs from the lotus position I sometimes rest in.

The Chaplain''s face lit up. "Thank God," he cried, clasping his hands together and casting his eyes toward heaven. "I thought you''d lost both legs!"

"Come on Padre. How could I go to the field without my legs? I''m in here because they took my appendix out."

The sequel came several years later. I was safely home and a State Senator, out with a young woman I''d been dating. In a cuddly mood, she was gently rubbing my stomach. Suddenly she stopped. "You''ve got a welt," she cried.

"Scar," I responded, trying to sound like James Cagney.

"What the hell happened?"

"Took my appendix out."

She beat me about the head and shoulders with a pillow. I should have said, “I don’t want to talk about it!” She’d still think I was a hero.

A few hours after the Chaplin left, they came in and loaded us on a C-141 Starlifter, and flew us to a hospital at airbase in the . Apparently the intelligence guys had picked up a rumor the VC were going to rocket the hospital that night. I don’t know if they did.

I was supposed to stay in , but ended up recuperating first in , then on . I was at one night. I spent the morning helping feed guys a lot worse off than me, including an officer who had so many strings of stitches on his body, it looked like his skin zipped on. I felt guilty about why I was there, like I was malingering.

My parents were delighted to learn I was in the hospital in —and out of for a bit. Within a week I was going on liberty, hitting the bars in , a patch over the hole in my side.

Getting to the hospital from Khe Sanh was interesting. I started having stomach pains in the afternoon. I assumed it was the warm Goofy Grape Fu

Bob Hall served as a Marine, volunteering for what he calls an easy tour in . At age 26, he graduated from college, and was elected to the senate, defeating a powerful Democratic incumbent by nine votes out of 60,000, in a seat not won by a Republican since 1938. He was re-elected four times by wide margins, retiring undefeated in 1982 to become an association executive. Along the way, he found time to earn a masters degree in history and to serve six more years in the Marine reserves. In addition to 23 years managing non-profits, he’s been frequently published in newspapers and magazines as a freelance writer.

This book began as an attempt to capture stories from Hall’s life as a Marine, as a state senator and as an association manager for his granddaughter, Britnye. When it grew to over 600 anecdotes, Hall says, “Many people (okay, my wife) urged me to put it in print. I promise this book will not change your life, you will be able to put it down, and it will not soon be a major motion picture. Plus you’ll have to turn the pages yourself.”

Included are stories that will delight and amuse you, as well as lessons learned about leadership, integrity and human relations. They range from Hall’s interactions with prominent politicians like Mike Dukakis, Bill Bulger, Kevin Harrington, John Kerry, Frank Sargent, John Olver and Barney Frank, to the everyday stresses of a Marine enlisted man during a difficult time. Readers looking for a blood and guts combat memoir or a slashing political exposé should keep looking. But those interested in politics and political campaigns, the Marines during or the challenges of managing non-profit associations will find it both educational and entertaining.

Robert A. Hall joined the Marines in 1964, upon graduation from high school in . In 1966, he volunteered for , serving what he calls “an easy tour for a Marine” as a Radio Relay chief. Following his discharge as a corporal in 1968, he attended and the , graduating in June of 1972 with a degree in Political Science.

In November of that year, Hall was elected to the state senate, defeating a powerful Democrat by a nine-vote margin (out of over 60,000 votes cast) in a 4 to 1 Democratic district that had not been won by a Republican since 1938. Hall was 26 at the time. He was re-elected four times by large margins, and in 1976, was nominated by both the Republican and Democratic Parties, defeating a Democrat by running on stickers in the Democratic pri. He was the Republican Whip of the senate when he retired undefeated in 1982.

While in the senate, Hall rejoined the Marine Reserves, serving from 1977 until time conflicts with a new job forced him to leave the Corps in 1983 as a Staff Sergeant. He also earned a Masters Degree in History in 1980, taking night courses at Fitchburg State College.

Since leaving politics, Hall has successfully managed non-profit associations for 23 years. A Certified Association Executive, he is currently Executive Director of the of Cosmetic Dentistry in (www.aacd.com), where he lives with his wife, Bonnie.

Hall is a frequently-published freelance writer, with opinion columns, articles, short fiction and poetry appearing in over 50 national and local magazines and newspapers. His work is included in Chicken Soup for the Veteran’s Soul; and in Before the Memories Fade, published by Author House.