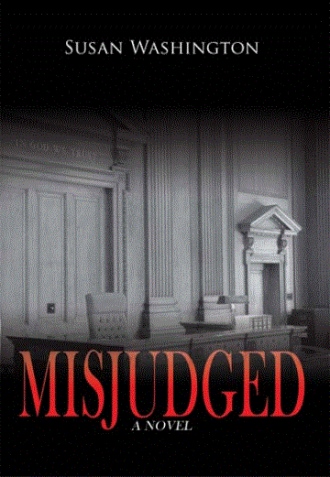 Suzanne went back to her chambers to take Oliver’s call. At least she wouldn’t have to look him in the eye. She turned on the small television on her credenza and caught a teaser for the Late Evening News. She’d definitely survived the editor’s cut. Judge Vincent would be the lead story.  Recurring stock footage of her on the bench accompanied a telling trailer: “Assistant District Attorney cries foul -- judge’s jockeying jinxes victim’s chance for justice.”

Her cell phone rang. It was Oliver.

“Suzanne, you know I don’t like surprises! Would you mind telling me what I’m getting ready to hear on the news?”

Do I have a choice?

“Rebecca Fitzgerald is out of town. A month ago I agreed to take the verdict if her jury was still out when she had to leave.”

“You said you wanted to know what’s going on—

“After extensive deliberations, the jury hung and I declared a mistrial.”

“You should’ve let Fitzgerald do her own dirty work, but what’s the hook?”

For me or the thousands of television viewers?

“Dammit, I should’ve known he had his hands in the kiln, stirring up some more crap!”

“He’s the prosecutor. He’s showboating for the victim. Blaming me instead of acknowledging he didn’t have a strong case.”

“Tell me about the case.”

“Oliver, look the story’s about to come on –

“Suzanne, it’s not important what they say, you’re not going to like their spin, regardless. We know what Rotherman is apt to say. Let’s focus on the truth. Break down the case for me. I can’t start the damage control until I have all the facts.”

“An elderly woman was found gagged and tied up in her bathtub, her home in Palmetto ransacked. The defendant on trial was charged as a party to the crime. The co-defendant is out on bond.”

“Why weren’t they both on trial?”

“She severed the trials.”

“Jesus, you know not to do that, right?”

In her debut novel, Misjudged, Susan Washington gives her readers an insider’s view of some of the challenges of wearing a black robe. Judge Suzanne Vincent was a rising star at her Atlanta law firm when she was tapped to serve on the Atlanta District Court. Now she presides over the Family Docket where she rarely takes a break from the dysfunctional families that lawyers constantly dump into her judicial lap. Her chief judge wants her off the bench. Suzanne’s effort to keep her seat forces her to deal publicly with what some call her record of misjudgment. Suzanne isn’t spared her own personal drama. Her grandmother’s unseemly death and mounting man issues only add to her problems. Bad gets worse when days before she is due to be reelected an eighteen-year-old secret turns her world upside down. Suzanne must make a far-reaching decision for which there is no legal precedent.

Susan has over twenty years of judicial service, including serving as a guest justice on the Georgia Supreme Court. Presently, she presides in the Family Division of the .  Previously, she served on the and the City Court of Atlanta. She has lectured nationally and taught judges in and the .  Currently, she is a member of the faculty of the .

She has served as a member on the Georgia Commission on Family Violence, the Georgia Commission on Child Support and served as Chair of the ’s Supreme Court Commission on Continuing Lawyer Competency. She has served in leadership capacity on the boards of the Atlanta Legal Aid Society, Camp Fire USA Georgia, Georgia Association of Black Women Attorneys, Judicial Sections of the Atlanta and Gate City Bar Associations, Legal Clinic for the Homeless, Buckhead Cascade City Chapter, The Links, Incorporated, National Conference of Christians and Jews and the YWCA of Greater Atlanta.

Her numerous awards include the Peace and Justice Service Award bestowed by the Martin Luther King Jr. Center for Nonviolent Social Change, and being recognized as one of Georgia’ s Most Influential Women (Top 50) and the YWCA’s Academy of Women Achievers.

She has served as a “Judicial Expert” on the Montel Williams Show, helped create the cable television show, Legally Speaking, and has appeared as WSB Channel 2’s Noonday Show “Legal Expert.”

Susan lives in with her family.