The Best of "Two Minute Training" 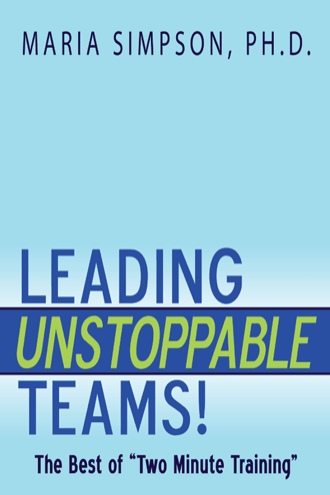 Sometimes teams are stuck in ineffective communications patterns that aren’t even recognized although they may be having significant impact on the team’s success. These patterns can be focused on such issues as relationships, processes, behaviors, or resources. Even if you are sure your team is working well, it might be useful to step back and take a look at the patterns of communications on these issues and see if any can be improved.

How can you make improvements in these patterns if they are not visible? Begin a process that will bring them to the surface so they can be explored.

Making hidden patterns visible. Bringing the patterns to the surface can be done informally or formally. Informal methods include stepping back from the discussion periodically and paying attention to more than the information being exchanged. It’s referred to as being the “participant-observer,” the person who participates fully and with just enough distance to recognize the dynamics and processes of the situation as well as the outcome.

Other informal methods include:

·       Gathering informal feedback from people who deal with your team to see how it is perceived by others, inside or outside the organization.

Formal methods include the use of focus groups and assessments or surveys, including formal interviews. They should be facilitated by an outsider to the group, and preferably to the organization. Inside consultants may not get all the information available simply because they, too, work for the organization and may be seen as not entirely neutral despite their best intentions and professional ethics. An outside consultant will have a fresh perspective; no internal relationships, loyalties or history to affect the process or the outcome; new skills to apply; and the platform to make recommendations more clearly than an internal consultant might have.

In addition, if negative information needs to be reported, especially about the department head, the consultant provides that feedback, absorbs the potentially negative responses to hearing it, and takes those responses with him or her at the end of the project. The internal relationships remain intact and hopefully, improved, and can be called upon by the team leader or department head to support planned change. If an internal person provides that feedback, no matter how carefully, resentment may be generated that may be difficult to overcome in the future.

In three cases where I worked with teams, I had to provide very difficult feedback to the team leaders about their leadership styles based on focus groups, survey responses, and interviews. This information was hard for leaders to hear since they were at the highest levels of their organizations and thought they had effective leadership skills. After providing the report and recommendations, I worked in the background with two of these leaders to follow-up and provide coaching on how to implement the recommendations. Positive actions and changes observed by staff members were attributed to the leaders, not the consultant, strengthening the leader’s skill and credibility, which was, of course, part of the plan.

Acting on the information. If you have identified ineffective patterns and want to make some changes, fix the easy things first.

·       Few comments during discussions? Go around the room and ask each person for comments on each topic. Don’t let them hide.

·       Little participation? Tell each person in advance what part of the meeting he or she will facilitate, not just what topic he or she will report on.

·       No clear actions taken on decisions? Have a recorder note every action that needs to be taken by whom and by what date. Have these actions read to the group before the meeting ends so people can’t say they didn’t have the same understanding as others about the necessary follow-up.

Since 2003, Dr. Maria Simpson’s weekly eColumn, Two Minute Training, has been a welcomed source of information on leadership and team development for a select group of readers.

Now, the first collection of these columns is available to the public in Leading Unstoppable Teams! Written for the organizational practitioner and based on her experience as consultant, executive coach, and mediator, these tips and ideas provide important information on how to encourage a team to higher performance and how to develop the skills necessary to become an effective team leader.

Leading Unstoppable Teams! is a handy reference for managers when a quick update or answer is needed, and can serve as the basis of management and leadership training programs. Short and focused on a single idea, each of the 57 articles provides the quick, practical answers to questions that pop up in today’s organizations. Its style and approach match the specific needs of today’s leaders and managers and those who are preparing to take on leadership roles in the future.

. . . these communication tips are timely and frankly they have begun to feel like an essential part of my personal growth. I hope you know what a difference you make in . . .  people’s lives!

I wanted to thank you once again for your wisdom . . . and for taking the time to show genuine, positive regard for those who have had contact with you. . . Each time I read the newsletter. . .  I trust that I am on the right track. Please continue to enlighten and educate, it is a gift that is appreciated and honored. Sacred work is never easy but you do that work with grace.

After becoming a mediator almost 20 years ago, Maria Simpson, Ph.D. decided to make it her mission to bring the skills and techniques of mediation into the workplace, knowing that if everyone learned just five mediation techniques, they could create workplace environments where conflict is a creative and productive force, and where teams collaborate to do their most effective work.

Since then, she has worked with leaders and their teams as executive coach, trainer, and consultant on broad organizational change projects, training and development programs, and survey projects, among other assignments, all of which included conflict resolution and mediation techniques. She has written extensively on organizational communications for the past six years in a weekly eColumn called “Two Minute Training” and on organizational culture and communications in a paper called "Is This a Good Fit?" She is also a prolific speaker, presenting at organizations such as the Association for Conflict Resolution, the California Association for Adult Day Services, and the Southern California Mediation Association.

Dr. Simpson has held senior management positions at The Conference Board, the New York Academy of Sciences, the New School University, and the City University of New York, and consulted with Bank of America, Easter Seals Southern California, Kaiser Permenente, HealthView, Inc., and Premiera Care, Inc. among others. She has also conducted executive coaching and organizational surveys for city governments in . She serves on the board of directors for the and for NEAS: Western, a provider of EAP services. She is also a mediator for the LA County Superior Court.

Dr. Simpson received her doctorate from and her mediation certificate from the Los Angeles County Bar Association. She teaches conflict resolution at CSU Dominguez Hills in the graduate program on Negotiation, Conflict Resolution and Peacebuilding.