Living With Lung and Colon Endometriosis 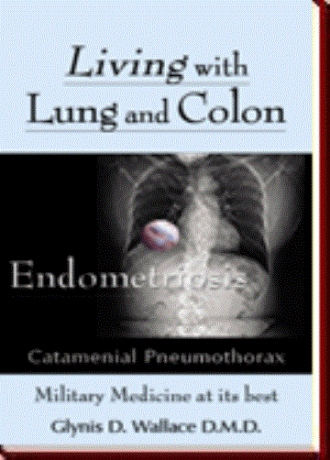 I wrote this book to share information and enlighten the nation about pulmonary endometriosis.  Pulmonary refers to the lung.  Endometriosis refers to tissue from the mucous membrane of the uterus where females carry their babies.  Endometrial implants appear on the lung like chocolate cysts and release blood between the lung and its lining, which is known as the pleura.  Menstruation, monthly flow of blood, occurring on the lung every month is a strange reality and difficult concept to fathom. This phenomenon, known as catamenial hemopneumothorax, is when endometriosis attaches to the lung, releases fluid, and allows air to move in by an unknown mechanism—all of which causes the lung to collapse.  For several years, denial was my coping mechanism, but after three major surgeries to remove endometriosis, seven chest tube operations to inflate and remove fluid from my lung, and extensive research, I conceded to the humbling reality.  Many medical professionals do not know about this syndrome and most standard textbooks do not mention it.  The literature states that 100 people in the have this rare gynecological disease, but the truth is only 100 appear in the literature.  I am convinced, along with my pulmonologist and gynecologist, that many women go undiagnosed due to lack of knowledge in the medical world. I hope my story helps others suffering with this strange yet maybe not so rare disease.  Although the has only 100 recorded cases, there are millions of women all over the world who suffer from the pain and infertility caused by endometriosis.

This book outlines my 13-year experience with pulmonary endometriosis through narrative summaries from the physicians who attempted to control this disease.  As an active duty military officer, I underwent extensive and extremely thorough diagnostic tests to determine fitness for duty.  This led to excellent medical treatment, which allowed me to continue serving on active duty. . I would like to thank the military, Air Force, Army, and Navy—all of whom I owe my life for sparing no expense to treat the disease and keep me alive over the years.

In 1958 100 women were written up in the literature with endometriosis on the lung causing it to fill up with fluid and collapse. Catamenial pneumothorax was considered extremely rare, but actually an under-recognized manifestation of catamenial ectopic endometriosis. 2016 record numbers of women have been diagnosed globally with menstrual lung collapse and other presentations referred to as Thoracic Endometriosis Syndrome.

A plainspoken chronicle of living with a dreadful case of a difficult-to-diagnosis disease.

What started as a minor pain just below her ribs would soon begin to impact the author’s breathing, and she was eventually diagnosed with pulmonary endometriosis. Endometriosis usually affects the mucous membrane of the uterus, but it can also be a traveler, with endometrial implants attaching themselves to the colon and the lungs. The tissue of the implants sheds, causing a monthly flow of blood that can lead to lung collapse. Desiring to call attention to the little-known disease, the author vibrantly recalls her 13-year struggle with the illness, the three major surgeries she underwent (in Army, Navy and Air Force hospitals) and the seven chest-tube procedures. She charts her progress and backslides, the expression of her symptoms and her close brushes with death. She also includes the surgeons’ narrative summaries of her operations. During her protracted battle with the disease, she faced countless debilitating procedures, including colonic resections and an abdominal hysterectomy with bilateral salpingo-oophorectomy. Though it may be expected that a military officer address each piece of new bad news with dignity and resolve, readers will still be impressed by Wallace’s fortitude, as well as the thoughtful, caring impulse that prompted her to write this book: to alert other women to this obscure, diagnostic nightmare of an illness.

A slim but sharp and valuable little book that will go a long way toward helping those who suffer from pulmonary endometriosis. Kirkus Discoveries August 31, 2006

Dr. Glynis D. Wallace, a graduate of Tufts University School of Dental Medicine, former Major in the USAF, and internationally known author. The centerpiece of all public relations efforts for Dr. Wallace is her amazing book "Living With Lung and Colon Endometriosis: Catamenial Pneumothorax", the first known published book on Catamenial Pneumothorax (menstrual lung collapse) now sold in many different countries. The book underscores her passion and provides the legitimacy of her credentials for writing the book. It is a tribute to her plight, and enormous ability to story tell with honesty her maze-like healthcare journey. With authority and fortitude, she initiated awareness and diagnosis to peak during her lung endometriosis advocacy. Dr. Wallace created the Wikipedia page for Catamenial Pneumothorax in 2006 which stimulated a move to action with undetermined numbers of women being diagnosed globally with Thoracic Endometriosis Syndrome.