A Guide for the Sportsman, Poultryman and Exhibitor of Rare Poultry Species and Gamefowl of the World 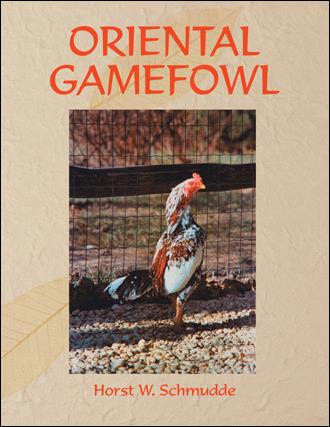 The subject on Shamos and other related breeds is a very comprehensive and complex one, relatively new and to some extent a mysterious one to the Western world – that is if one excludes the sparsely information in older literature on the famous Japanese Long-tail fowl - and research really has been very limited, probably due to the language barrier. Even books in Japanese have become available only just during the last 15 to 20 years, thanks to the efforts of some fanatic western poultry fanciers traveling the far eastern continent. But the complexity of the breed is mainly because of the multitude of varieties and subspecies developed in various different regions of , as we will see in the following.

But no other country in the world has been devoted as much as has been to the preservation and conservation of many of their national breeds, even to the extent to protect them by law, thus preventing the exportation of such species, ex. The Shamos were put under Japanese government protection in 1941. It is hard to say whether this has been beneficial to the mere existence and preservation of some of these breeds and might be questionable, thereby allowing such breeds only in the hands of the Japanese poultry world but also to greatly restricting the gene pool, which is necessary to preserve such fowl for future generations. However, due to global interest in the environment and economical as well as political interaction, Japanese authorities as well as breeders have become more flexible and encouraging over the last decade to share their rich heritage in rare and fancy poultry with the rest of the world, thereby making the export of hatching eggs and live birds to other countries more possible.

While Malays and Asils were mentioned frequently and on a regular basis in older literature, the Shamos seem to have first caught the attention of writers at the beginning of the 19th century. In Weir’s ‘The Poultry Book’ from 1904 and 1915 we find an account of the breed by Dr. H.P. Clarke of Indianapolis/USA, associating them with the Oriental Gamefowl from the island of Madagascar, the Malgache, a kind of “naked neck Malay” (described elsewhere in this book), but gives little background information about the distribution thereof. A collaborator of Clarke and avid cockfighting enthusiast was the renowned writer Carlos A. Finsterbusch from Santiago/Chile, who in his book “Cockfighting All Over the World” in 1929 traced the roots of the what was called ‘Siamese and Malacca fowl’ at the time and showed pictures in his work of Siamese Malay Games and Japanese Shamos of 13 lbs and more. However, at the same time while apologizing for the lack of detailed scientific fundamental and documented information, resorting to what was known to him already at the time, thereby acknowledging the accomplishments of Japanese breeders of developing a species that ultimately became a national treasure. Although Finsterbusch’s main interest was cockfighting, he recognized the variety in the breed and classified them into 4 groups:   ….. read on inside.

The book, over 30 years in the making and based on worldwide research about the history and evolution of Oriental poultry races with a detailed description, their origin, distribution and current day breeding status worldwide, is a long needed work while nothing like it has been published for over fifty years. This book provides in detail educational information about the ancestors of domestic chickens, whereby it traces the origin of many ancient poultry breeds, how and where they were developed many generations ago for the purpose of sportsmanship before cockfighting was banned in most countries. But that has not stopped enthusiasts and fanciers to save many of these species from extinction and rather promoting them through a worldwide interest in exhibitions competitions, whereby in alone are national poultry exhibitions with over 40,000 and even to 60,000 entries every year excite the public in tough competitions as covered in this work. Moreover, the reader will learn everything essential about purposeful breeding and preserving these breeds for future generations to come. The over 250 pictures of some 35 breeds shown in this book have been collected from various sources worldwide, many are of birds bred and photographed by the author giving the reader information not available elsewhere, which includes a today’s analysis of the sport of cockfighting as well as extensive information on genetics of the rarest species.

Horst W. Schmudde, born 1934, raised and educated in has been an avid poultry fancier since early childhood. Already during his college years he acquired and concentrated on the conservation of various Oriental gamefowl breeds while showing and winning accolades at the most prestigious poultry exhibitions in . Following his graduation from college receiving a dual major in engineering he obtained his poultry judge license in 1959, making him one of the youngest judges in the German pure-bred poultry fanciers organizations, becoming ultimately one of the much sought after judges in for over forty years even after moving to the in 1964. Elected secretary of the German gamefowl club for those years, in the he then founded the Oriental Fowl Fanciers Association. Over these four decades he wrote numerous articles for specialty magazines on both sides of the Atlantic and he collaborated in the translation of “Poultry as a Hobby” published in the U.S. Due to his profession in engineering working for some renowned conglomerates requiring him to travel to many countries, he was able on his trips to follow his personal interest in those rare and often national cultural poultry races, enabling him to import hatching eggs or live birds and raising them at his home in New Jersey, thereby sharing offspring with many fanciers here and exporting same to Europe and South America to help promoting them on three continents.