The Madness of George W. Bush:

A Reflection of Our Collective Psychosis 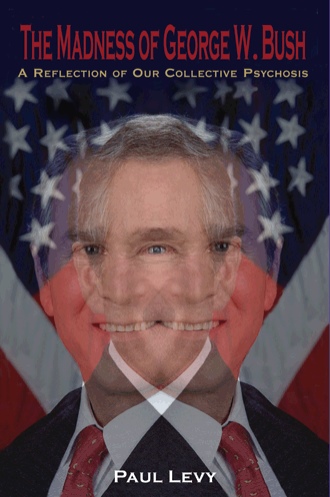 George W. Bush is ill. He has a psycho-spiritual dis-ease of the soul, a sickness that is endemic to our culture and symptomatic of the times in which we live. It is an illness that has been with us since time immemorial. Because it is an illness in the soul of all of humanity, it pervades the field and is in all of us in potential at any moment, which makes it especially hard to diagnose.


Bush''s malady is quite different from schizophrenia, for example, in which different parts of the personality are fragmented and not connected to each other, resulting in a state of internal chaos. As compared to the dis-order of the schizophrenic, Bush can sound quite coherent and appear like a "regular" guy, which makes the syndrome he is suffering from very hard to recognize. This is because the healthy parts of his personality have been co-opted by the pathological aspect, which drafts them into its service. Because of the way the personality self-organizes an outer display of coherence around a pathogenic core, I would like to name Bush''s illness "Malignant Egophrenia" (as compared to schizophrenia), or "ME disease," for short. If ME disease goes unrecognized and is not contained, it can be very destructive, particularly if the person afflicted is in a position of power.


In much the same way that a child''s psychology cannot be understood without looking at the family system of which he or she is a part, George Bush does not exist in isolation. We can view Bush-and his entire administration: Cheney, Rumsfeld, Rice, etc., as well as the corporate, military industrial complex they are co-dependently enmeshed with, the media they control, the voters supporting them, and ourselves as well-as interconnected parts of a whole system, or a "field." Instead of relating to any part of this field as an isolated entity, it's important to contemplate the entire interdependent field as the "medium" through which malignant egophrenia manifests and propagates itself. ME disease is a field phenomenon and needs to be contemplated as such. Bush''s sickness is our own.


THE DISEASE IS NON-LOCAL


Being a field phenomenon, malignant egophrenia is non-local in nature, which means that it is not bound by the limitations of time or space. Being non-local, this disease pervades and underlies the entire field and can therefore manifest anywhere, through anyone, and at any moment. The disease''s non-local nature makes the question of who has the disease irrelevant, as we all have it in potential. It is more a question of whether or not we are aware of our susceptibility to fall prey to the disease. This awareness itself serves as an immunization protecting us from the pernicious effects of the illness, thereby allowing us to be of genuine help to others.


Bush, like all of us, is both a manifestation of this deeper field and simultaneously an agent affecting the field. He's become so fully taken over by the disease, all the while not suspecting a thing, that he's become a "carrier" for this death-creating disease, thus infecting the field around him. He's become a portal through which the field around him "warps" in such a way as to feed and support his pathogenic process. A non-local, reciprocally co-arising and interdependent field of unconscious denial and cover-up constellates around Bush to enable and protect his pathology. People who support Bush are actually complicit with and enabling Bush's madness in a co-dependent, self-reinforcing feedback loop that is "closed," which is to say it is insular and not open to any feedback from the "real" world.


Bush supporters are not merely disinterested in seeing that they are in denial of reality; on the contrary, they actively don't want to look at this-they resist self-reflection at all costs. Bush and his supporters perversely interpret any feedback from the real world reflecting back their unconsciousness as evidence proving the rightness of their viewpoint. All of Bush's supporters mutually reinforce each others' unconscious resistance to such a degree that a collective, interdependent field of impenetrability is collectively conjured up by them that literally resists consciousness.


People who don''t recognize Bush''s illness and support him are unconsciously colluding with and enabling the co-creation of the pathological field incarnating itself into the human family. People who support Bush become unwitting agents through which this non-local disease feeds and replicates itself. By supporting Bush, they collaborate with and become parts of the greater, interconnected, and self-organizing field of the disease.


The situation is analogous to when seemingly good, normal, loving Germans supported Hitler, believing he was a good leader trying to help them. The German people didn''t realize that the virulent malignant egophrenia pathogen had taken possession of Hitler and was incarnating itself through him. By not seeing this and supporting Hitler, they became agents used by this non-local, deadly disease to propagate itself. This is why Jung says, "evil needs masses for its genesis and continued existence."[i] What happened in Germany was a collective psychosis, and this is what is taking place in our country right now.

THE MADNESS OF GEORGE W. BUSH:
A REFLECTION OF OUR COLLECTIVE PSYCHOSIS

In this ground-breaking work, Paul Levy explores whether the madness that George W. Bush has fallen into is showing us something particularly important about ourselves. What if Bush’s madness is a reflection of our own potential for madness? What if Bush has been collectively dreamed up to play out, in full-bodied form, a pathological role existing deep within the collective unconscious of all humanity? Though this book centers on George Bush, it is ultimately about ourselves.

In The Madness of George W. Bush: A Reflection of Our Collective Psychosis, Levy analyzes the current state of our world as if it is a mass shared dream all 6.4 billion of us are collaboratively dreaming up into materialization. Drawing heavily on the insights of the great doctor of the soul, C. G. Jung, Levy identifies the root process being dreamed up on the world stage is a collective psychosis he calls “malignant egophrenia.” He illumines how this disease of the psyche expresses itself non-locally (not bound by space or time) throughout the underlying unified field that connects us all, propagating itself through the unconscious blind spots of the collective. He points out that if the malignant egophrenia epidemic manifesting in our world continues to go unrecognized, it will result in endless suffering and self-destruction. Levy proposes that this collective madness is simultaneously revealing to us our potential for an evolutionary quantum leap in human consciousness. He concludes that whether we destroy ourselves as a species or wake up depends on enough of us recognizing what the insanity of our current world crisis is revealing to us. The choice, and responsibility, is truly ours.

“The Jungian analysis by Paul Levy, of Bush and the culture which maintains him, reaches deep into the American psyche. It should be studied and digested by everyone. If the citizenry would recognize that Bush’s egomania is acting out a national illness, we would all be saner. If the US could integrate the “shadow” which Bush projects upon the “the axis of evil,” perhaps we could achieve world peace and start to solve global problems. A MUST READ.”
-Carol S. Wolman, MD, Board Certified in Psychiatry

Deeply steeped in and inspired by the work of C. G. Jung, Paul is an innovator in the field of dreaming (both night dreams, as well as waking dreams). He has had numerous articles published on consciousness, dreaming and spirituality, and has lectured about his work at various universities. A Tibetan Buddhist practitioner for over 20 years, he has intimately studied with some of the greatest spiritual masters of Tibet and Burma. A visionary artist, he is creating an Art-Happening called Global Awakening. Inspired by the Bush administration, Paul has become a spiritually informed political activist. Please visit his website at awaken , or e-mail him "Click here"