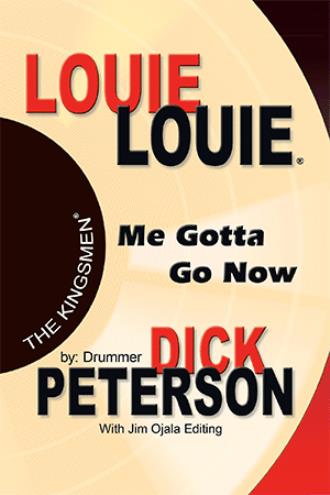 Worldwide, scores of millions of people recognize the opening strains of ‘Louie Louie’ the instant they hear them. Whether listening to The Kingsmen blasting away on the radio or CD or tape or watching actors performing in countless movies like Animal House or Mr. Holland’s Opus or Dave, people of all ages and backgrounds break into smiles the moment that primal riff first tickles their ears. On a multitude of levels, ‘Louie Louie’ has embedded itself deep within our collective consciousness and become a permanent element of our cultural identity. Yet few know the true story behind this legendary recording and its aftermath.”

Since The Kingsmen’s release of “Louie Louie” in 1963, a controversy over the questionable lyrics remains unresolved. Untold millions of copies have been sold and well over 1,000 cover versions have been recorded, giving the recording iconic status while crowning the band the “fathers of garage rock” and bestowing The Kingsmen with the title of “’s Party Band”.

Forty years ago, as a member of The Kingsmen, I lived through, or perhaps I should say “survived”, the original pandemonium that surrounded the song. Back then, following an extensive FBI investigation personally directed by J. Edgar Hoover, a federal judge found that our version of the song was “unintelligible at any speed.” His declaration gave the youth of the nebulosity necessary for the growth of the rumors and accusations that helped create the legend of “Louie Louie”.

Herein the humorous, sometimes unbelievable, details of what really happened to The Kingsmen and “Louie Louie” are revealed for the first time. The never-ending controversy that lies at the heart of this tale is more than just once-upon-a-time history; the legend, the mystery, the wonder of “Louie Louie” live on today.

Born in the , Dick Peterson grew up in quaint, picturesque , where early on he developed a passion for classical music and a curiosity for Jazz. Moving to as a high school student, at 17 the author joined a local rock-’n’-roll band, The Kingsmen, and soon found himself in the middle of one of the most famous incidents in the history of rock music: the controversy surrounding the alleged dirty lyrics of “Louie Louie.” Today, more than 40 years later, he continues to perform with The Kingsmen.

He has held positions with Chapel Music, Capitol Records and Avco Embassy Records and acted as musical producer for television specials on ABC, PBS, NBC and CBS. He studied music production under Lamont Dozier and worked under his employ for three years. He has worked with artists like The Pointer Sisters, Mac Davis, Dionne Warwick, Lionel Richie, Dolly Parton, Andre Crouch and Billy Davis; as a performer, he has appeared with The Beach Boys, The Rolling Stones, Ray Charles, Duke Ellington, Ricky Nelson and a host of other legendary music figures. As a songwriter, he has been recorded by artists such as Kenny Rogers, Laura Branigan, Bill Medley and Peter Allen. Winner of the Ginga Musical Festival and a member of the Northwest Music Association Hall of Fame, Mr. Peterson is featured in the exhibit at EMP in . He has appeared on The Today Show, American Bandstand, Where The Action Is, Shindig, Hullabaloo, and The Wolfman Jack Show as well as on numerous shows on MTV. He also appeared with Annette Funicello and Frankie Avalon in the Beach Party movie How To Stuff A Wild Bikini. 1998 brought an end to nine years of precedent-setting litigation in which he won, for The Kingsmen, the rights to and ownership of all of the Kingsmen master recordings, including “Louie Louie.”