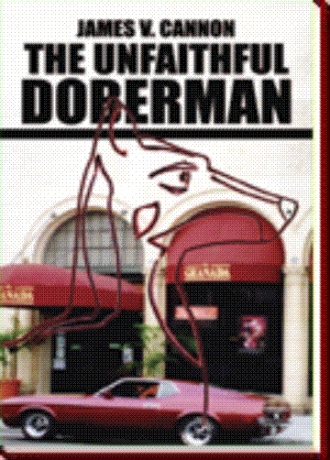 Danaly did not need a nudge.  She tore out of my grasp and flew past a very fast Lisa.  Camila was about seventy feet away.  Captain Fernandez was about forty feet away and was running to catch Camila.  Camila had already started running towards her mother.

Danaly never took her eyes off Captain Fernandez.  Fernandez pointed the gun at Danaly and fired another blank.  Danaly never waivered, she increased her speed to a blur.  Ten feet away she launched her own attack straight at Captain Fernandez’s well-padded throat.  Her powerful chest slammed into his jute arm as her head passed over the jute arm and her teeth sank into the padded neck.  The Doberman's momentum was enough to knock Fernandez off his feet.  Danaly somersaulted over his shoulders, never releasing the padded neck.  Fernandez fired another blank.  Danaly released his neck and locked down on the arm holding the pistol.

Che Guevara cultists are wrecking the lives of  Lisa and her young daughter.  Yet Che has been dead for over thirty years.  His body was discovered beneath an airstrip in Bolivia in 1997.  How does he reach beyond the grave to torment Lisa?  Is there some connection between an old ex-Marine and the trouble?  Is it possible that an innocent Doberman Pinscher can provide a solution and stop the terror?  How can a dog that is given five stars for loyalty by the American Kennel Club be considered unfaithful?  Everything starts with a red-haired bitch on a warm and rainy night - really.

Jim brings his experience in the Marine Corps, the 1962 October Missile Crisis, and the Bay of Pigs fiasco, into play in this mystery thriller.  He appreciates Dobermans as much as the Marines did in WWII and loves the breed.  He has lived in the area where the story is written.

Mr. Cannon enjoys writing historical fiction from a "history of conflict" perspective (as contrasted to concensus history found in textbooks for children).  His first book, The War on Mexico, opens the reader's mind to the nativist, anti-Catholic, anti-Irish, undercurrents in the war and the deliberate provocations of President Polk to take Alta California.

The Unfaithful Doberman explores the bonds between a family and its dog, multiple loyalties, and the effects of training.  Personal experiences dominate the story as truth strains credulity.