A Letter to America

Is President Bush Leading us in the Right Direction? 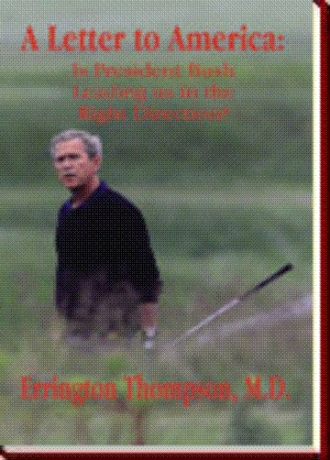 On compassionate conservativism - To move to an entirely different arena where the President might demonstrate his compassion, consider stem cell research.  Stem cell research is one of the most promising areas in academic medicine today, it promises to lead to treatments and perhaps even cures or total prevention of serious health problems such as diabetes (which affects over eighteen million Americans per year), Alzheimer’s disease (which affects over four million Americans per year), Parkinson’s disease (which affects over one million Americans per year) and spinal cord injuries (which affects over ten thousand Americans per year).  One problem with stem cell research is that these cells can’t be found just anywhere.  They are only found in young human embryos.  A second problem—a rightly serious one in many people’s eyes-- is that scientists have to destroy the embryo in order to do this research.  It should be understood that the stem cell research debate is different from the abortion debate.   Human embryos are the by-products of in vitro fertilization, which is one of the many medical procedures developed out of compassion for childless couples to remedy infertility. The process of in vitro fertilization is inexact at this time, and often that procedure produces far more human embryos than could possibly be used by the families involved in their creation.  At present, these extra embryos are either frozen or discarded. If these embryos are going to

Currently, there are many books which have been written documenting the issues of the Bush Presidency; A Letter to America draws the reader a clearer more concise picture of major policies of this White House.  The author, a trauma surgeon, uses multiple forms of data to analyze and treat an injured patient.  He uses those same skills to dissect the policies of Bush’s White House.  Written in a fluid, crisp style, the author draws on his experience as a surgeon and an American to examine the White House from many angles.  He leads one to the conclusion that the only prescription for is that President Bush needs a vacation.

Errington C. Thompson, MD, surgeon, scholar, fulltime sports fan and part-time political activist. He is active in a number of community projects and initiatives. Through medicine, he strives to improve the physical health of all he treats. Through this book, he hopes to share his thoughts and reflections on the current political landscape. Dr. Thompson, educated at and , currently resides in .