THE RENAISSANCE OF THE RAILROAD

A chronicle of the transformation of the century 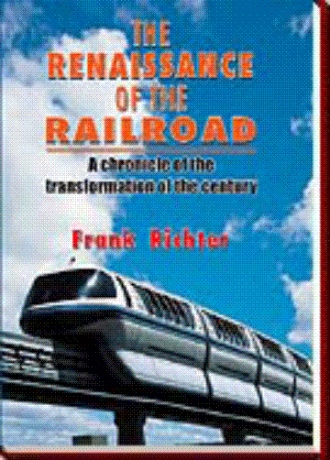 Although its author does not put it that way, the book bearing that title could well be put as “A story that needs to be told.” Indeed, the chronicle of a mighty transformation that is too often overshadowed by other events. .

At the beginning of the 20th century the steam locomotive powered train was supreme in transportation. Then by mid century it had all but disappeared. Yet at the dawn of the new century the auto, truck, and airplane was little more than a hobby of the few.

That railroad at the turn of the century had a dramatic excitement and position in the culture of its own. Yet now, at the present beginning of the new 21st century that “railroad” still occupies a prominent place in the world of transportation.

It did not suffer the fate of the horse and buggy, as commonplace in the late 19th, century. Instead, the railroad underwent a transformation as dynamic as the auto, truck and plane, and even the oncoming telephone, radio, moving picture and television and computer.

That steam powered Iron Horse has been replaced by the diesel-electric locomotive, the “electric” train, and even as the 21st century emerged, the “floating train” maglev. But there was far more to that transformation indeed.

That is the story that has been told more comprehensively than ever before in the just public book of that title. And it shows together how well man and machine have worked together to draw upon other emerging technologies and advances that swept into reality far more in the 20th  century than any time in the history of man.

Since the end of World War II Frank Richter has “worked with the railroad,.” and intensively in pursuit of the transformation of the railroad that is the subject of this book..

It was with the end of the war that he left the Service with the U.S. Army Corps of Engineers as an editor in its Publications Section.

That resulted in starting the publication Modern Railroads, along with David R. Watson, as a publication dedicated to the technology and business of railroad transportation. He carried out the dual role of Executive Vice President and Treasurer, first also as Editor and then as Publisher.

Shortly after selling of the company to Cahners Publishing Company in 1971 he joined Progressive Railroading which had just started. It then became Murphy Richter Publishing Co. Its success was also to lead its adding the Track Yearbook and the Locomotive & Car Year book.

Then some 46 years later, in 1994, he received the Intermodal Association of North America “Silver Kingpin” award for “Excellence in Intermodalism.” It to one person each year.

He also has been named an Honorary Member of the American Railway Engineering and Maintenance of Way Association.

Hence, since the end of World War II in 1945, Frank Richter has been in close association with the innnovators and tailorers of the remarkable railroad transformation that has taken place. It can be said that in place of “working on the railroad,” as the earlier song goes, he has been “working with the railroad” by close personal contact with those who have been and continue to be the innovators and tailorers of this remarkable transformation of the 20th century and on into the now 21st.