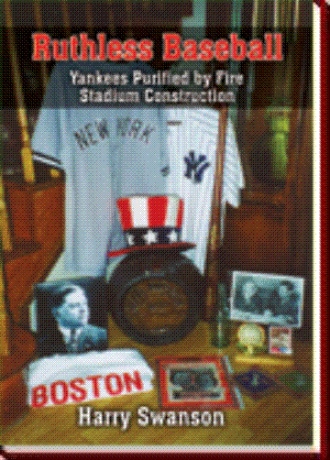 On October 29th the commissioner refused to recognize the Yankees third place finish for the 1919 season which in turn blocked the players from receiving their dollar share of the season pool that was based final standings.  Ruppert and Huston, not at all pleased with this back room nonsense, decided to pay the players their due directly from club funds.  The Colonels expected to be reimbursed once the funds were released from the league office.

BanJo was not interested in olive branches or just plain moving on.  He was outraged at what he saw as insubordination within the ranks.  Johnson was going to rule.  This was his league, to be run his way.  Johnson would to work behind the scenes by providing an alleged statement by Carl Mays that McGraw and would use to deny the extension of the 1920 lease of the Polo Grounds to the Yankees.  Although only a threat, the Colonels had to take it seriously.  The Lords of Baseball were playing more than cat and mouse with the Yankees.  The Colonels also found it odd that all their potential new sites for their future playing field, that required league approval, were somehow being leaked to the press.  Johnson would stop at nothing in his pursuit to punish the owners. The Colonels had three choices: Conform, fight or sell. Fortunately for New Yorkers, they chose to fight.  That would not hold true for fans.

This story is about endless problems and assaults against the Yankee franchise between 1919 and 1923. It involves bookmakers, racetrack owners, bootleggers, gamblers, shakedown artist, promoters, murderers, those with political clout and simply an over supply of corrupt underhanded individuals. They would and could muscle anyone that was a threat or hadn’t earned the right to succeed. Some of the same individuals that frustrated the Yankee club were also actively involved in planning and or covering up the 1919 World Series Black Sox Scandal.

A brief introduction is offered that details the assault that occur against the Baltimore Orioles that all but destroyed the club and lead to American League President Ban Johnson, moving the franchise to . Unknowingly, Johnson would find those that worked against him in were waiting for his every move in . Ultimately he would be duped into selling the club to the worst two characters that had to offer.

Colonels Jacob Ruppert and Til L. Huston would buy the franchise in 1915 before the previous owners had all but destroyed it. As a result of a single player trade in 1919, the Yankee club owners would find themselves thrown into four years of continuous fighting to assure their franchise survival.

Attacks against the baseball franchise would lead to, battles in the courts, a split with the American League owners creating two camps, many delays and unnecessary financial hardships. During this same time, the club had to deal with building a stadium under adverse conditions, contending with labors strikes, 1919 fan outrage, political under-handedness and baseball governance, back room dealings.

The reader will also be exposed to the most detailed account of the building of Yankee Stadium ever written from heated memos and cost over runs, to the make and models of the trucks used to carry materials. All problems/issues are presented, discussed and responsibility assigned.

Four years of constant turmoil. It would take one “bigger than life player” to counter all these negative forces and save the franchise. That player was Babe Ruth. If you didn’t appreciate the Babe and what he did for baseball and the New York Yankees before, you will after reading this book. All was made possible by the Babe.

For the last 25 years, Harry has served as a Controller, CFO, Director of Administration and a Management Consultant.

He holds a BBA in accounting, MBA and has held various professional certifications.  In addition, holds a real estate brokers license in .  He is married for 25 years to wife Susan and has two children, Christine and Lauren.