A world of women, and their servants...

by Brian B. Hawthorne 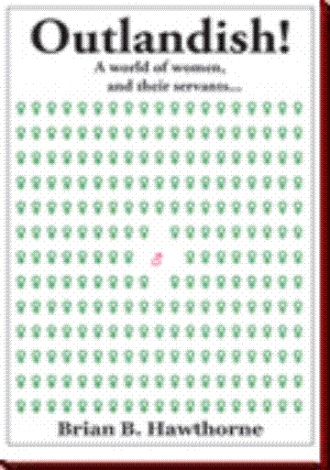 Kayla stood and looked at the familiar scene of the two bare bodies for a short time. Her mother and looked very relaxed, and very comfortable in each other’s arms. Kayla walked to the side of the bed closest to . Sitting down with one leg drawn up on the bed, she noticed once again that there were tiny golden hairs growing on her leg, but that ’s leg was as sleek as...as Rosita’s bottom, she decided. She lightly rubbed her leg, then ’s, to see if she could feel the difference. Shortly, she felt ’s eyes upon her. They smiled at each other. Soundlessly, and gently, extricated himself from the beautiful woman’s embrace. He rose naked from Marissa’s bed and went to be with her daughter.

To Berry, feeling shame would only come from failing to please one of his Ladies. His nakedness was as familiar, and unremarkable, as his constant erection. He took Kayla’s hand and they went out to the great room. noticed that it was raining softly out on the courtyard, and looked a bit gray and gloomy. Swinging Kayla’s arm, walked with her to the great room’s spa tub area, a general purpose bathing and recreation area. Kayla shed her garment and they went into the warm, bubbly embrace of the spa tub. They played and chatted together for a while, then helped each other to dry off. assisted Kayla with selecting her fragrance for the day, and combed and brushed her hair. Finally, he retrieved a short robe for her and helped her put it on.

They went into the kitchen as Kayla fanned the robe to enjoy the cool air. Kayla sat down and watched the play of light on ’s naked but colorful body as he moved swiftly about the kitchen. She knew that he liked to be looked at, and she liked watching him. Being without even an apron in a room filled with hot and sharp objects required bravery, or grace.

was very graceful, moving nimbly around the room with the smooth, practiced motions of a dancer, or stage artist. He was as comfortable here as he was in any of their bedrooms. In either case, he was always performing in some manner. Soon he had breakfast for Kayla and himself, as well as the obligatory coffee for Lady Miranda and Lady Marissa.

“My Mom’s still pretty young, isn’t she, Berry?” Kayla asked suddenly, “Do you think she’ll decide to have another baby?”

“Hmm, well, she’s young and healthy enough, that’s for sure. If she wants to have another girl, she probably will.” He reflected, “You know, she might decide to have twins, too. That would even the score here in the Great House, and my would it be fun to have so many young girls around. Especially if Kira and Mia decide to build another House.”

Kayla was pensive for a moment, “, you think long, and quickly. I’m not sure we’re nearly the same age at all.”

Now it was ’s turn to be quiet for a bit. “‘Thinking long’,” started, “but Kayla, you know much more than I do. All those modules you’ve gone through, I don’t know any of that stuff. You’re way smarter than I am.” Kayla shook her head, “, you haven’t even studied the modules. I bet you could go through them twice as fast as me.”

“Twice as fast as ” said Miranda, entering the kitchen and selecting her morning coffee. “Kayla may have a point, Berry. While we may not expect that you can ever enter a career, there’s no reason I know that you shouldn’t start learning everything you can. You could be a big help to some of us perhaps.”

was stunned. He had never expected to be anything in this Great House except a running cook, bed boy, and towel fetcher. Miranda continued, “I’ll set up another station in the great room for to use when he gets time. And , I think Kayla’s right, you should get through the first modules in record time.” She paused, “But that doesn’t mean you’ll be able to neglect your principle duties. I expect you girls to make sure he doesn’t turn into a bookworm. If you need him, I think you know how to get his attention.” Kayla raised her hands, opening and closing them in mock attack. Everyone laughed.

“Thank you, Lady Miranda, thank you. Now I really feel like a part of the family. I will try to please you.” Miranda kissed him, “Of course, . You always do.” She went out to

Outlandish! tells the story of an unusual society, one composed exclusively of women. Impossible? Not with oocyte fusion, the blending of the genetic characteristics of two women, which produced only female children. This unfortunate necessity, after the bloody revolution, treachery, and counterrevolution aboard their Starship, over generations of travel, and colonization, became a familiar way of life.

Until, that is, they realized that with their advanced genetic knowledge, they could recreate the missing portion of humanity, if they dared. It was common knowledge that men were unstable, and dangerous.

Cautiously, they developed “kinder, gentler,” companions, which they called males.

The males became their household servants, their pets and slaves. ... Their willing slaves...

Brian Hawthorne lives with his wife and two children in . One of those "quiet types" that you would never suspect.

As an avid reader and Science Fiction fan, he is following a prescription written by Dr. Isaac Asimov; that any reader, after long enough, will want to write. To that end, he writes for his own entertainment, and that of his readers. With creative exuberance, he tells of relationships, ingenious conveniences, and stubborn human behaviors.

Outlandish! is book one of a trilogy that will be available soon. He also writes ... poetry! So if you decide not to buy this book, you may still someday get to read his words in a greeting card.