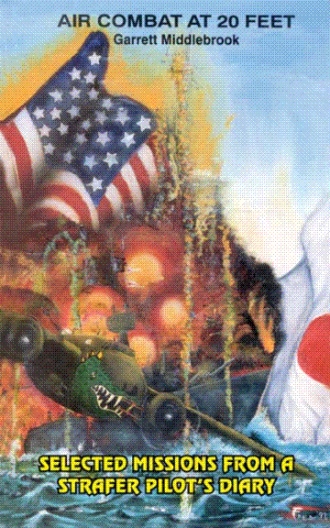 God, it was unbelievable.  The 50-caliber bullets streamed from my eight guns as well as the shells from my 20mm Cannon.  Added to my own firepower were an equal number of machine guns firing from both Gay’s and Lackness’s planes so, that in all, twenty-four machine guns were pouring out bullets at a combined rate of 14,400 per minute or 240 rounds per second.  Every sixth round being a tracer, to my mind’s eye, thousands of lightening bolts were pouring forth from my plane in a steady stream of reddish-white color.  The entire area erupted in dust, fires and explosions.  My first burst of fire hit the gasoline supply dump off the east end of the runway and flames shot into the air in red waves.  Had I been 100 feet lower, the explosion would have engulfed my plane.

I banked sharply to the left in order to bring my fire onto the clusters of bombers, but I did not cease firing for, during the turn, my bullets were striking other planes and equipment scattered about.  The first twin engine Sally bomber which my tracers poured into exploded and the concussion caused an identical plane alongside it to jump several feet into the air before settling back to earth where it too began to burn.  I saw the tail section upon a third bomber disintegrate while the wing of yet another was shredded.  Two Japanese soldiers were running toward the jungle along the south edge of the runway.  They ran alongside another bomber just as my firepower reached it.  The violent explosion formed a searing red ball which engulfed the two Japs causing them instantaneously to disappear from the face of the earth.

My plane was in a perfectly coordinated turn to the left with its nose pointed downward so that, like a grim sickle of destruction, the steady fire from my guns passed through plane after plane, a score of items of equipment and many human bodies.

It was with regret that I had to roll my plane back to the right and away from the many more fruitful targets lining the south side of the runway.  The nose of my ship and direction of my flight was pointing more and more toward the ridge over which we had charged in our initial attack.  Had I continued that turn I would have been flying south while Gay and Lackness were at that time already rolling their planes toward the east.  I had no plan to be left behind but, at the same time, having come so far and having risked so much, I loathed giving up the last chance of making the enemy pay the ultimate price I could rain down upon them.  Fortunately, I still had a little altitude to spend and some more rounds of ammunition to expend.  Therefore, I rolled back from a left into a right turn and for the second time my merciless firepower walked across the runway cutting one plane in half and setting still another on fire.  Between the airstrip and the shoreline was a row of palms interspersed with other indigenous trees.  Under the palms with their slender trunks and towering canopies were two Zero fighter planes, one facing the runway while the other one faced perpendicular to the first with its fuselage pointed the same way I was flying.  My firepower struck the wings and tail section moving the plane forward and causing it to collide with the adjacent first plane.  While so many events, both little and big, significant and trivial, were occurring, I was impressed that I had rolled a plane several feet forward with the sole power of machine gun bullets.

I raised as high as I could in my seat looking over the instrument panel down upon the ship at the same time.  I knew the bombardier was toggling out the bombs.  I stared down at the gun nest near the bow from where the machine gun fire had been coming.  Quite clearly I could see the gunner hovering in a crouched position as close as possible to the metal shield.  Our gunfire had done a fine job of intimidation.  The Jap had abandoned his gun and was seeking protection.  He only prolonged his life five seconds.

“Bombs away!” the bombardier shouted over the intercom and the bomb bay doors snapped shut.

All our eyes were fixed on it with absolute concentration and apprehension.

The explosion was so great that I was startled in disbelief.  Two bombs penetrated below deck into the interior of the ship and exploded a fraction of a second apart.  The entire ship seemed to rise several feet, almost out of the water, while a series of other bombs, dropped by our wingman, exploded just along its hull on the opposite side from us sending up water geysers higher than the superstructures, and, at the same time, splitting the outer platting of the vessel with tremendous concussions.

Pittman continued to circle, our faces frozen in incredulous expressions, while the entire ship split directly in the middle and each end sunk into the deep, bow first and stern first respectively.  I

Enter the cockpit and become a co-pilot with a WWII straffer bomber-pilot attacking at 20 feet.  In route to the target share his fear and agony.  When attack time comes observe that his mental concentration consumes his fear as he fights with 8 machine guns while bombing and maneuvering.  Intelligence is his ultimate weapon.  An inferno of the target is the result.  Departing the target, he fights 10 Jap fighter planes in an hour-long battle.  When you reach home base you will say: “I never want to relive that horrendous ordeal”.

But wait!  Your pilot must attack again the next day.  So order the book and translate the words into real life drama!

The Author joined the Air Force and entered pilot training in July 1941.  A year later he flew the Pacific to with no navigational aids except those in .  He flew 65 missions being among the first to attack from tree top height.

He was rotated back to the States in November 1943 and became commanding officer of a navigational training squadron.  He was released from active duty in 1946 but remained in the reserves until 1955, retiring with rank of Major.

He practiced trial law for a short time, but shortly changed professions to invest in, develop and finance real estate.  He operated a title insurance company for years.

He retired in 2002, observing the course of history.