The Irish, like any indigenous people, have long since merged with other bloodlines. We can never know the minds of our ancestors, but we can know our minds, and create a powerful tradition applicable to today; one that will carry forward the whispering of the ancient ways through our efforts of the Faith’s Revival.

In this Codex 1, I shall endeavor to explain, explore and provide experience into the Irish Faery-Faith Cosmology through the reconstruction of a Creation Myth and how this applies to Faery Glamoury.

The importance of having a comprehensible Creation Myth --of which none exists -- in the Irish Faery-Faith Tradition is twofold.

This insight aids in shedding light on their modus operandi. If there was an “MO” behind Faery Faith practitioners, it could very well have been one centered in the message of a division of ego-soul, ergo conscious separation from divinity due to a warrior spirit, which may have occurred after the Celtic tribes invaded .

While it is not secret that the Keltoi were a race of warriors, at their core was a lovely sentimentality toward life. A romantic world-view, if you will, for they held a strong belief in the invisible and natural worlds; the land was of extreme importance to them and considered sacred.

This warrior spirit was not aimed at conquering “nature,” but other human beings. Their attitude toward nature, while it may very well have not been submissive, might have been one of gaining the trust of nature’s domicile, engaging in battles of challenge to become an entrusted champion. Such championship may have showed a great strength and humility, a genuine touch of loyalty and respect toward that aspect of life, which, in many ways, is far greater than the mere habitation of humanity.

The Keltoi were a chivalrous class of people, who allied the invisible and natural worlds and, who, quite possibly lost their inner spark and faded away (just as the Tuatha De Danann). The mentality of humankind, which turned ever increasingly toward conquering and annihilating the natural world, would have been against their religion.

While the Tuatha De Danann reigned supreme in , their magical realm touched the life of the tribes so intimately that, perhaps, of all the Celtic tribes, the Irish clans became and still are the most mystical. For theirs is a poetical mind, one touching the Mystic, which is why this ancient oral Faith’s survival was ensured by those who began recording it in the 4th-century of the common era.

Not unlike other spiritual traditions with a pagan origin, the Faery Faith has evolved over the centuries, undergoing reconstruction and needing a great deal of recreating to become a viable practice of today.

The spiritual work we do today in the Faith, is centered around co-habitation with the natural world, reconnecting with the dormant powers of the OtherWorld, re-activating doorways into these realms, awakening the Faery Sleepers (Guides, Guardians, allies, and companions), to assist us in connecting more fully with their world.

Obscure literature, folk-lore, fairy-tales, and historical accounts have been procured and researched with the hope of finding a glimpse of a sign, or a key rather, which would provide the next piece of the puzzle, unlock the next door, and allow admittance into the next chamber of the Crystal Palace or Sidhe Mound.

Many times I’ve found that, upon entering such a chamber and finding that next piece of the puzzle in the form of a word or symbol or archetype, while it did, indeed, shed light on what was recently unclear or missing, it simply burdened me with but more questions.

However, these keys must be shared willingly and not claimed exclusively; for in doing so the Faith of the Faery becomes tied-up in the minds and hearts of the greedy and the Faith falls prey to that insidious ego-war of who was there first, or whose religion is the oldest, or more authentic, which we know to be a misnomer. Every religion, every spiritual tradition, every so-called truth b 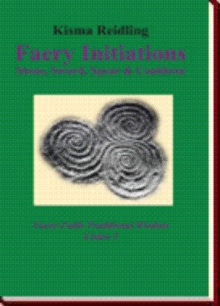 For those new to the ways of the Bhairdic & Druidic Irish Faery-Faith, Faery-Faith Traditional Wisdom, Codex 1, will be both an educational workbook and a magical tome. Replete with spiritual instruction and exercises, historical documentation, poetry, pathworkings, and invaluable references, Faery-Faith Traditional Wisdom, Codex 1 imparts timeless wisdom along with the guidance necessary for practical application in the 21st century.

Faery-Faith Traditional Wisdom, Codex 1 endeavors to explain, explore, and provide experience into Irish Cosmology through the reconstruction of a valid Creation Myth, and goes on to explain how this applies to Faery Glamoury. No different then its past, the modern art of Faery Glamoury is centered around co-habitation with the natural world, connecting with the dormant powers of the Otherworld, reactivating doorways into Faery realms, awakening Faery Sleepers, and developing a more aligned communication with the Divine to assist us in connecting with our own Authentic Self.

The contents found in this volume is the “soul-stuff” that Grove vows are sworn on. This is the knowledge of the adept, as we all very well know: information is power. The time for sharing of power is at hand.

The Great Mystery will fulfill those who seek it.