Down Through The Years 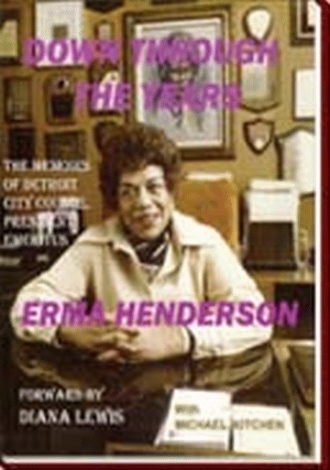 In 1938, Lela Wilcox, Geneva McNeal, Onslow Parish, and I discussed the possibility of attending the Michigan Republican Convention, which was to be held at the Pantland Hotel in Grand Rapids.  As members of the Young Republicans Club for the 1st District of Detroit, we thought it would be a good experience for us to attend.  I was twenty-one years old, and it would be the first election in which I could vote.

So we mailed our registration forms for the convention, which included the women’s luncheon, and a room at the hotel.  We were in high spirits, excited to be attending the convention as delegates representing our district.  However, the reception we received when we arrived did not exemplify the philosophy upon which the Republican Party was supposed to be based.

We arrived in the early afternoon, and were impressed by the majesty of the hotel.  The inside was equally impressive, ornately decorated and expansive.  We approached the front desk of the hotel, to check into our rooms, before participating in the convention.  The man at the front desk gave us a blank stare as we stood before him, requesting access to our rooms.  He said that there were no rooms available for us.

We looked at each other, silently wondering how we’d handle this.  Our paperwork was mailed on time.  So we asked the man about this, and he was adamant.  There were no rooms for us.  I was the president of the women’s division of the club, and decided that we would take action to break down this discrimination.  Instead of leaving the hotel, which I’m sure the front desk clerk and the management of the hotel would have preferred, I explained to the clerk that we had reserved rooms, and that we’d wait for them.

We set our bags and ourselves down in the lobby.  Every ten minutes or so, I would return to the front desk and asked if our rooms had become available.  He maintained that there were no rooms for us.  Then I would remind him that we’d wait until they were.  This was the routine.

While time ticked away, I came up with an idea.  Each of us had sung in church choirs during our youth.  We were four well-trained, well-tuned voices waiting for our rooms in the lobby of the hotel.  So I decided that we’d start singing.  My favorite song of the day was “God Bless ” which Kate Smith had made popular.

The four of us broke out in song, “God Bless ” our continuous anthem.  We sounded so good, people coming into the hotel thought that the convention organizers had hired us to be welcoming entertainment.  Over and over, we’d sing the song, in different variations and styles.  Our voices reverberated throughout the hotel lobby.

Down Through the Years is an inspirational presentation of the personal experiences of three-term Council President Emeritus of the City of , Erma Henderson.  Erma’s life of spiritual development, social action, and political achievement from her modest beginnings in Detroit’s “Black Bottom” neighborhood, is a powerful demonstration that any person has the potential to succeed and benefit the world.  Her genuine warmth and sincerity has earned her the title of “Mother Henderson” to so many citizens of Detroit and the world.

This is an important book for our time.  It is a reflection of what America has come through.  It is an inspiration to readers of all races in America, and to men and women.  It is a door to the past for today’s youth, to guide them on how to see problems, and to empower everyone to take charge of their own life.  It puts forth a vision for the future, a vision manifested by this woman who has lived through many experiences, who knows where we, as Detroiters and as Americans, have come from, and where we can go.

But most importantly, it is the story of the remarkable life of an amazing woman.

Erma Henderson served on the Detroit City Council from 1973 through 1989.  Filling the vacant seat left open by the death of Robert Tindal, she became the first African American woman to serve on ’s City Council, with her victory in the run-off election of 1972.  She won her seat again in the 1973 election, then followed with overwhelming victories in 1977, 1981, and 1985, making her the first African American to be elected Detroit City Council President, and the only person to have held that position for three consecutive terms.

Born in 1917, her life has been committed to social activism, racial and cultural inclusion, democratic ideals and spiritual principles.  She has spoken nationally and internationally on these topics.