The Gospel According to Jerry

Confessions of a Fool for Christ

by Jerry G. A. Rodgers 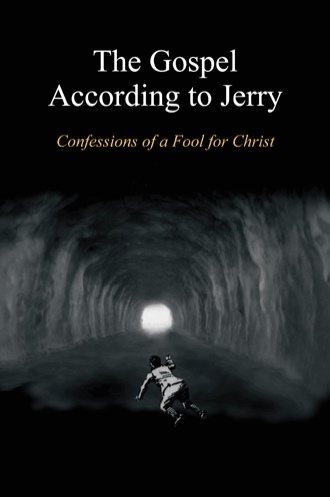 The immediate result of the incident with which I have just related was the realization that I was punishing the child for the parents’ failure. I had failed Juanita from our high school days__failed in courage, in honesty, in faithfulness and in love. Now I was failing again__failing in judgment certainly, but most of all failing to lift up a standard by which we could judge what is courageous and honest and faithful and loving__in a word, what is of real value__a standard to which we could rally with confidence that it would stand firm and not be broken by the storms and the conflicts that frighten and sway us.

I now could see that such a standard had been lifted in the cross of Christ. The price it cost testifies to the value of that standard, and at last my eyes were opened to an inkling of the terrible price it had cost by the suffering of .

From that hour I was a changed man: I was a Christian. I understood what Christ had accomplished. The words that I had heard and read again and again through childhood and adolescence, in Sunday school and church and at home, from parents and teachers and books, and all the influences overt and subtle of a Christian culture and background, at last I understood.

The Bible is a closed book to one who has not received the light that shone on Saul of Tarsus on the road to Damascus; and by this I do not mean that in order to receive the Christian message one must undergo all that Paul experienced, or that others have experienced whose conversions stand out for their especially dramatic qualities. What I mean is that one cannot understand the Bible without the light of faith. And by the light of faith I do not mean the blindness of naïve credulity, either: I mean the insight gained from the open-minded and open-hearted willingness to commit oneself (not the other but the self ) to the operation and illumination of the unknown God.

Just as the scientist gains understanding of the objective world by submitting its objects to his operation and the illumination of his intellect, so in the subjective world of spirit insight is gained only by submission of the subject (that is, oneself ) to the exper-iment of determining the laws and truths of the spirit. Thus the role of the subjective scientist is exactly the reverse of the role of the objective scientist, and the reason why spiritual insight is losing the race with “scientific” knowledge today is simply because all of us would rather experiment than be experimented on. If we do not relish the role of executioner, no one is willing to exchange places with the executed__no one, that is, except Christ. Well, and who is Christ? Where is he? Can we find him? Is he coming back?

Let us ask him:

The testimony of this book reaffirms the original New Testament witness, that the Christian’s separation from the world is so radical that in the eyes of the unbaptized worldling he is quite literally out of his mind (Acts 26:24). Paul’s description of the Christian gospel as “folly” (1 Cor. ) therefore is seen to be no mere literary device but a deep penetration to the root of the Christian’s alienation from the world. The basic proclamation of that gospel__that God was in Christ, who died for our sins, rose from the grave, ascended into heaven and will some day return to judge both the living and the dead__is at best hard to believe (Mark 16:9-14), and at worst has been placed in the same category of delusional psychology of which those with experience in caring for the mentally ill can give numerous examples (Albert Schweitzer, The Psychiatric Study of Jesus). My own experience of the gospel, having run this gamut from best to worst, has been for me a brilliant illumination of the “depth of the riches of the wisdom and knowledge of God” (Rom. ).  I believe it cannot but result in enlightenment for others also, and therefore I publicly make this confession.

___from the author’s Foreword

G. A. (Jerry) Rodgers, born 1925 in Roanoke, IL, born again 1953 in San Francisco, is a veteran of World War II and the Korean War, happily married husband in an interracial marriage, father or stepfather of five, grandfather of seven, and great-grandfather of three. Raised the son of a Methodist preacher; after leaving home and studying philosophy at and the he professed agnosticism until his conversion at the age of 27. His conversion experience made his family think he had lost his mind, and they had him committed to mental hospitals for several years after his discharge from the Navy in 1953. His story is an archetypical example of Anton Boisen’s thesis in his Exploration of the Inner World (1936) in which he examined the mirror-image relationship of mental illness and religious experience; and it throws a glaring new light on Schweitzer’s Quest of the Historical Jesus, initiated at the beginning of the last century.