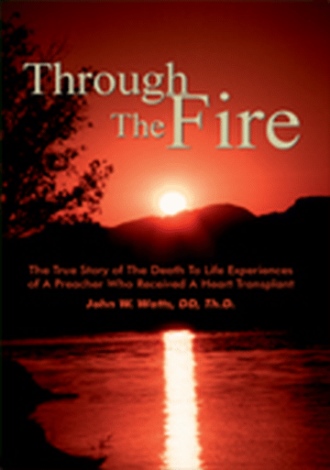 The devil had my funeral planned, but God intervened and canceled the party.  The fact is Satan had enlisted my help with planning the event.  It was going to be such a grand and glorious celebration.  I was quite disappointed that the very nature of the event would preclude my being present to enjoy the festivities.

For me, it was a great dilemma.  If I decided to seek acceptance into a transplant program, how would I pray?  I was struggling with the knowledge that for me to receive a new heart and live, someone must die.  To resolve the issue, I had to travel almost 20,000 miles, to , , .  That is where God had placed a man who would have just the right words to enlighten me and give me peace of mind that seeking a new heart was the right thing to do.

I had never been afraid to die.  Even when I had good reason to believe that death was imminent, I was never afraid of it.  I had already been clinically dead at least four times over the course of many years struggling with my heart disease.  I can tell you that I have vivid, detailed, crystal clear memories of the things and the persons that I saw heard and felt, on at least two of the occasions when I was, for a brief time, clinically dead – no heart beat and no breathing.

I knew that whether I would live or if I would die, the ordeal was almost over.  My future was, as it always had been, in the capable, loving hands of God.  It was almost over.  I wanted it to be over – one way or the other.  I was tired, very tired, but I was not afraid.

(My wife’s) -- last words were, as she rushed out into the hallway toward the elevators with her eyes ablaze, “Tell them that if they try to move John to a germ infested semi-private room I will throw myself on the floor under the wheels of his bed to keep them from moving him!”  With that she was gone.

When Dr. Hill asked me if I thought it had been worth it.  So many wonderful things I have enjoyed, seen, touched, felt, experienced and lived since the transplant and since surviving that first difficult year and a half.  Was it worth it?   Was it worth it?

I thought, “Well, Glory Hallelujah to the good Lord God Almighty, yes, Yes, YES!  It was worth it all.”

You will LAUGH, you will CRY and you will LEARN more about the personal side of heart transplants and organ donation than you ever could have imagined.

A must-read if you or someone you know is waiting for or considering a heart or other organ transplant.    Learn what is involved and what it all means from the perspective of one man and his family who have “been there and done that.”

The author is an ordained Baptist minister who has served full-time as a minister of music in New Mexico and Tennessee, and as Pastor of three churches in Tennessee and Ohio.  He has been an insurance salesman and mental health counselor, hotel marketing and advertising executive, and a hotel developer and general manager.  He has served his community as a Certified Emergency Medical Technician with the volunteer ambulance and rescue squad.

He has preached in over thirty states and in four countries internationally and has traveled extensively in ministry throughout Europe, Africa, the Middle East and Central America.

He is currently retired and lives in South Florida with his wife Brenda.    They have four children and four grandchildren.