IF BAD SOUND WERE FATAL, AUDIO WOULD BE THE LEADING CAUSE OF DEATH 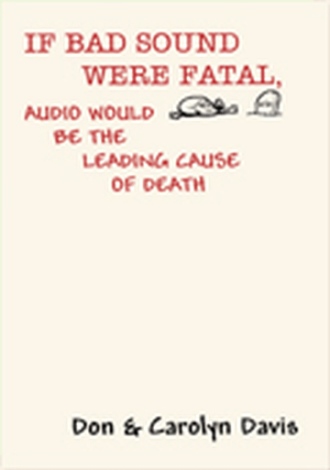 If Bad Sound Were Fatal, Audio Would be the Leading Cause of Death

William B. Snow & the Enhanced Orchestra

I can’t remember the exact year but it was probably around 1969 that Bill Snow of Steinberg & Snow (Bell Labs) fame came to our house in for lunch. Of course, this was a thrill and we were avid listeners as he told us of his many years of research at Bell Labs during the formative years of the development of motion picture sound.

Bill Snow’s discussion of the 1933 stereophonic broadcast was the most memorable. He said that the recording and broadcast is remembered for its stereophonic aspect, but what was most significant to him (and most neglected—this is late 60s remember) was that the orchestra was enhanced by +3 dB. Leopold Stokowski was the conductor. Stokowski wrote in his book entitled Music For All Of Us (Simon & Schuster, New York, 1943).

When electrical instruments are relatively perfect, they will free musicians from our present constant preoccupation with the imperfections and technical difficulties of instruments. We shall be able to give all our feeling and thought to the inner essence of the music, because the instruments will respond with extreme sensitivity to every difference of feeling in the player and the music.

2003 NOTE: While I have always been totally fascinated by the challenge of “fidelity” in musical reproduction. (Paul Klipsch took away the word “high” from me with the remark, “You wouldn’t call your wife highly faithful, would you?”)

There is today no substitute for “live” music. We still don’t know all the parameters present in a live performance. Yes! I enjoy recorded music, which has come an astounding distance in my lifetime, but one live performance easily disabuses me of the belief that we have achieved fidelity.

For several days we heard what sounded like a dog whining in the deep woods. Returning to the house one morning after the morning chores, I heard a whimpering distress cry under the low rear deck to the house.

I was able to gradually coax out a little black and white puppy that was very hungry and afraid of the two German Shepherds hovering over him. After two full bowls of dry dog food, which the puppy lay in while eating it, he decided to totally wholeheartedly and without wavering in loyalty become a dog. Since we now have a Poncho, Patch, Punch, Pete and Princess—why not have a Pedro. The first time we drove away in the truck it ran piteously after us, providing a clue as to how it might have come to be starving in our woods.

This morning, two weeks after Pedro’s arrival, I watched him run joyously through the woods with Patch and Princess, at one point grabbing Patch by the tail and pulling hard. Pedro has a speedy learning curve such that:

1. He knows not to go near Princess’s feeding dish if he wishes to remain among the living,

2. His dish is the one on the far left&#8212but he still insists on taking a quick glance at the other two first,

3. A rifle in my hands means a walk in the woods,

4. When Patch and Princess have their noses in the ground up to their eyeballs, he can run in under their bellies a have a chance at a mole,

5. He has learned that cats are fast with their claws if you’re deaf to their warning hisses, so he now has a built in bypass when the cats are in his path,

6. He’s found that his soulful brown eyes and rotary rear end will get any lady visitor to pick him up,

7. Finally, he’s found that if he sits still and endures having his ticks taken off with the long nose pliers, he gets a food treat for his stoicism. At one point he got so many ticks on him he had enough to start an independent political party.

Speaking of ticks—I’ve been able to better understand politicians through a careful observation of tick behavior. First, find a host with blood, then attach yourself to them and tax their supply. As soon as you’re well established, bring in others on your back until you have enough to totally drain your host. It’s not commonly known that when ticks bite politicians, they exchange mutual infections. The politician goes on the tax and anti-gun committees that are then headed up by the ticks who have been in turn infected by politician and have swollen to enormous size and power on federal blood.

These committee heads that are, in actuality, disguised ticks, can be discerned by two telltale clues. First they can’t reason logically and believe things are animated and evil. Second, they cannot imagine even in the wildest stretch of their imagination that any individual is responsible for his or her own acts. A special subspe

If Bad Sound Were Fatal, Audio Would be the Leading Cause of Death is about the “mind set” surrounding the most successful education idea in the audio industry, started by Don & Carolyn Davis, the founders of Synergetic Audio Concepts.  Taken from over twenty years of Syn-Aud-Con Newsletters, If Bad Sound Were Fatal-- is the non technical side of what was shared world-wide with thousands of Syn-Aud-Con “grads.” It is a look at what inspired, thrilled, educated, re-directed, and entertained those on the journey to professionalism in audio and acoustics. It is what the found interesting, both in their own experiences and in the experiences of their grads.  Liberally annotated with 2003 comments on the original articles, it reveals the humorous, the travel experiences, philosophy, management mishaps, mistakes and myths, and is a cornucopia of shared synergetic insights on everything from audio to xylophones.  There is a heavy dose of history of audio giants, many of whom the knew personally, and the explosion of audio knowledge moving the audio industry out of the 1920s into the 21st century. The majority of the book can serve as an “ink blot” of diverse individuals who shared what amused, entertained and informed them.  If you approach this book logically, you’re doomed to failure. It is an extreme case of “free association” reminiscences.

Don & Carolyn Davis form a unique husband and wife team working in audio, starting in 1951 with The Golden Ear in , selling eclectic high fidelity equipment. Don was Paul Klipsch’s President in charge of Vice in the late 50s, and worked for Altec Lansing from 1959 until 1972 where he was co-inventor of 1/3-octave equalization. The founded Synergetic Audio Concepts in 1973 in response to the growing need in the audio industry for training in the fundaments of sound reinforcement. Their work in equalization, speech intelligibility and recording technologies provided the backbone for developing training seminars and workshops.

Don has authored three books, Acoustical Tests and Measurements in 1965, How to Build Speaker Enclosures in 1968, co-authored with Alex Badmaieff, which has sold over 200,000 copies, and Sound System Engineering, co-authored with his wife, Carolyn, in 1975. They are working on the 3rd edition with co-author, Dr. Eugene Patronis.

The authors of this book, after enduring really poor sound quality at a meeting of a professional audio society, uttered in frustration, “If bad sound were fatal, audio would be the leading cause of death.”

They have spent their professional careers writing and lecturing on sound system engineering. The audio industry has generously recognized their efforts as instrumental in the better sound quality we enjoy today. Don & Carolyn are both Fellows of the Audio Engineering Society and have received many awards in the audio industry.

In the process of communicating with the grads of their seminars on audio and acoustics, a quarterly Newsletter was established. Most of the Newsletter was technical in nature, but also contained the evolving mindset that bonded teachers and grads into something not originally expected – a fraternity of people dedicated to changing an industry.

These excerpts from the Syn-Aud-Con Newsletters, annotated in 2003, go back to the beginning of these changes in the industry up to the ’ retirement in 1995.

The book provides a remarkable insight into entrepreneur teachers communication with entrepreneur students, the typical attendees at their seminars were already successful n their chosen industry, but knew in their hears that there was a higher standard and they actively sought it.