The Ghoul of Grays Harbor 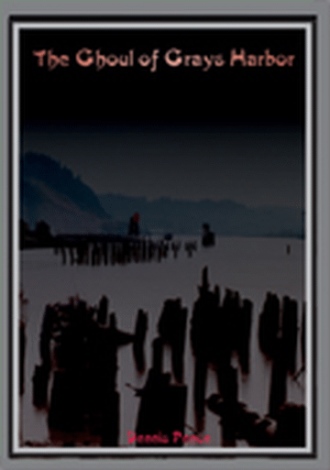 Dusk settled upon the land. It was already dark within the confines of the coniferous forest. Tree limbs drooped heavily under their rain-laden weight. A wind began to blow, fitfully at first, then stronger. The nearby ran bank full with dirty brown floodwater, and was still rising. The rushing current and the wind were the only sounds to be heard. And the monotonous pattering of the unceasing rain.

In the dying light a man sighted down a rifle over the top of a Hemlock windfall. His dull faded clothes were soaked and rainwater dripped from the brim of his hat. His boots and pants from the knees down were caked with mud. A Colt pistol hung from a holster attached to a belt around the man's waist.

Felton Connelly dearly wanted a cigarette, but the risk was too great. He had been in this cramped position for nearly an hour now without moving. The mud made a small sucking sound as he squirmed a little to ease a spasm in his leg. He peered over the windfall trying to see into the rainy darkness.

He wondered what it actually was that he looked for. Why he had stayed in that cramped position for the last hour or so escaped him. Except that something was out of the ordinary.

Ever since someone had taken a shot at him in a few days past, he was edgy. Now he was more edgy than ever. Not more than an hour ago while walking through the forest, an alien sound came from ahead of him. He crouched down behind the windfall, not wishing to walk into unexpected danger. If there was danger. Once, glancing along his back trail, he thought he detected a movement. So, he decided to stay put.

The last vestiges of light disappeared as the dark of night prevailed. Visibility was at best only a few feet. Still, he did not move. He didn't have the nerve to move. He dearly wanted the warmth of a campfire and the taste of harsh cigarette smoke. But, some sixth sense seemed to warn him to stay put.

After riding the train from to , he caught a ride with a teamster who was driving a wagonload of supplies as far as . That was yesterday. For some odd reason, he thought he was being followed from the time he left .

This morning, he left on foot under cover of the predawn darkness. He thought he slipped away undetected, but after passing in midmorning he was sure he was being followed. Not that he had seen anything or anybody on his back trail. It was that sixth sense that told him he was tailed. Now, a few miles out of on this stormy night, that same sixth sense was flashing another warning.

Maybe he should have taken that Indian's offer of a ride in his cedar dugout canoe down the river from to . He had thought it best to stay afoot. The stream was rising rapidly due to the stormy weather and it might have been a wild ride down the floodwaters of the river. Not to mention that sitting in a canoe he'd be like a duck in a shooting gallery to an unseen marksman.

He was having second thoughts. At least he'd be in shelter and warm right now. Instead of laying in the mud soaked to the bone and freezing his ass off. And the fact that someone might be waiting for him to make a move. A move that might be his last.

One thing he knew for sure. He was a damn sight colder now than he’d been an hour ago.

The wind increased. A gust stronger than the others caught the trees and relieved them of their weight of water. Only to be burdened again by the steadily falling rain.

His stomach growled. He suddenly remembered he’d eaten nothing since morning. With as little movement as possible, he dug into a makeshift backpack lying beside him. Finding a piece of jerky, he stuffed it into his mouth and began to chew.

He felt fear's icy grip on his spine when a stick cracked a few feet away. He tightened his clench on the rifle and tried to see into the inky blackness. He saw nothing. It must be the wind.

A half-hour went by with no other sound but that of the wind, rain, and the flooding river. He was shivering from the wet cold. And, he dearly wanted that cigarette.

The hell with it. He was going to smoke a cigarette. He was cold and hungry and getting mad. The cigarette would improve his spirits. Let the bastards try to get him.

He paused. Who? He still wasn't sure there was somebody out there. But that sixth sense again told him he was not alone in the forest this night.

It is 1910 along the rain drenched coast of  state. Felton Connelly is trying to run from a past that haunts him. A past that took the lives of his wife and two children. His dedication to being a police officer kept him from being there that night to save his family. He vowed to never do police work again.

Until his friend Nolan Delford, an detective talks him into working undercover. A reluctant but capable Connelly agrees to aid Delford in his quest to bring one Billy Gohl, an thug, to justice. Gohl is suspected of murder and dumping the bodies into . Many of the corpses have surfaced in the harbor with empty pockets, heads bashed in, and a bullet hole between the eyes.

Two women vie for Connelly’s attention. One of great beauty, the other a plain but strong young widow with two sons whose husband was done away with by Billy Gohl.

Not only must Connelly bring Gohl to justice, but he also must choose which woman he wants. If his haunted past doesn’t get in the way.

Since he was old enough to put pen to paper, Dennis Pence knew he would be a writer. “There’s nothing more exciting than putting words on a blank page,” he says. Dennis is both a published freelance writer and photographer. “The Ghoul Of Grays Harbor” is his first novel. He is currently at work on a second novel.

Dennis lives in the hills of northwest Lewis County, Washington.