A New Look at the Unification of Physics

by DOUGLAS A. PINNOW & KIRK MILLER 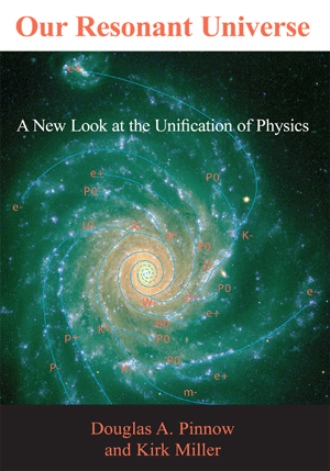 From the foreword by Dr Kenneth S. Schneider

In the first half of the twentieth century the world was presented with four fundamental forces, which provided the causal agent for all physical processes. These were gravitation, electromagnetism, and the strong and weak nuclear forces. The physics community became justifiably enamored with unifying these into a single force, or rather, in seeing them as manifestations of a single law governing the universe. The search for this law came to be referred to as the development of the unified field theory.

In the second half of the century, this quest ranked high in the priorities of the physics community. As a result, astounding progress was made in a relatively short time. The standard model, electroweak theory, the family of grand unified theories (GUTs), gauge theory, string theory, and M-brane theory were all developed. Each theory provided new insights and added new bricks in the road to the unified field theory.

However, either viewed individually or as a whole, these approaches do not bring us to the end of the road, to the unified field theory itself. This is not due to any readily apparent flaw. Rather, the approaches give an impression of incompleteness. One of them might rely too heavily on ad hoc inputs to be the right approach. Another might ignore one of the fundamental forces because it does not fit neatly into the mathematical framework. Still another might be conceptually elegant, but mathematically so intractable that it fails to provide any testable results.

The approach originally conceived by Douglas Pinnow, then developed and presented here by Pinnow and Miller, is another brick along the yellow brick road to the unified field theory. In my opinion, however, it is a very big brick indeed, and it represents a giant step forward. It is fundamentally different from other approaches: It is conceptually simpler. It does not invent new entities to explain the universe. It is mathematically tractable. And its predictions should be testable in the near future.

Pinnow and Miller call their approach the resonance model. This is an appropriate name, as the model describes unification within the framework of a spectrum of electromagnetic standing waves. This conception, both simple and beautiful, is able to determine the masses and charges of known particles with amazing accuracy. It combines all four forces, and explains the elusive nature of electronic charge as a ‘twist’ in the resonating wave, a twist easily identified with a fifth dimension proposed nearly eighty years ago to explain electromagnetism in the context of general relativity.

The resonance model sets up ready tests for verification in the near future. If it is correct, do not expect to see the anticipated zoo of particles predicted by the standard model at masses just above one thousand GeV. They do not exist. If the resonance model is correct, the magnetic moment of the Σ0 particle is negative, not positive as predicted by the standard model. Both of these tests should be within the reach of experimental physics within a decade. Researchers at CERN and Fermilab, take note.

I congratulate Pinnow and Miller. In my opinion they have a well deserved place at the Round Table of the Knights of the Unified Field Theory.

Our Resonant Universe presents the resonance model, a ground-breaking vision of the nature of the universe. By applying a simple electromagnetic approach to both elemental matter and nuclear reactions, Pinnow and Miller unite mass, spin, and charge with the four fundamental forces of the universe, without invoking the arbitrary constants of the standard model or the multi-dimensional mathematics of string theory. The results are striking in their accuracy and in their descriptive power. The model also provides a series of predictions that will soon put this conception of the universe to the test.

Douglas Pinnow received a bachelors in engineering physics from Cornell in 1961, and a PhD in physics from the Catholic University of America, as a NASA fellow, in 1967. He went on to become Supervisor of the Quantum Electronics Group at Bell Labs, Assistant Manager of the Chemical-Physics Department at Hughes Research Laboratory, and Director of R&D at Times Fiber. In 1985 he founded Universal Photonix, and later its subsidiary, Electronic Monitoring Systems.

Dr Pinnow is a Fellow of the Optical Society of America and has chaired major conferences of the OSA and IEEE, such as the 1983 Conference on Lasers and Electro-Optics He currently teaches graduate electro-optics at UC Irvine, and has over fifty technical papers and numerous patents to his name.

Kirk Miller received a bachelors in physics from UC Berkeley in 1990 and a masters in education from the University of Michigan, Ann Arbor, in 1994. He has lived abroad for several years, has taught physics and chemistry in Benin with the Peace Corps, and is currently pursuing a doctorate in linguistics at UC Santa Barbara.