The Big Band Days: A Memoir and Source Book 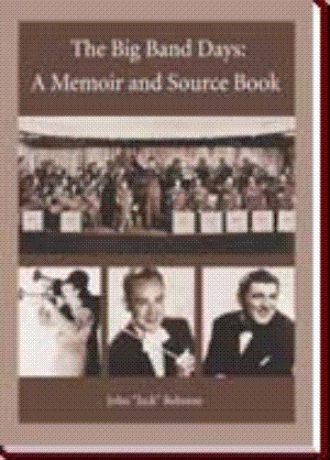 Woody Herman told jazz critic and radio host Ralph J. Gleason on the "Jazz Casuals" broadcasts of the 1960s that his band didn’t change arrangements when they played the usual dance gigs. They usually set aside about a half hour to 45 minutes of the four hour performance for concerts when they were on the road, he said.

Such "concerts" would have been unheard of for a touring band in the 1930s and even the ‘40s when danceland owners wanted soft dance music . . . nothing else. Major big bands on the road in the 1950s, by contrast, were already experimenting with a mixture of dance music and other entertainment. The reason?

Lots of them. It allowed the band to feature better paid soloists and vocal groups and resolve the ego problems some bandleaders and sidemen faced from night to night. Listen to Ralph Burns, pianist, composer and arranger for the Herman band as he reminisced in 1993 about the very popular instrumental "Early Autumn" he scored.

"When Stan Getz (tenor saxophonist) joined Herman there were no numbers written for him . . . and he played tunes written for others and became ‘remorseful’. . . he kept after Woody to get him some numbers and so I when I had to write an end to the ‘Summer Sequence" score---a larger piece to record---Woody said: ‘Ralph, will you please, please give him something to play on this?’ That’s how Early Autumn came about. I wrote every change in the book on it and the first time Stan played it was just like magic. . . Here’s to Stan and Woody up there."

Big band musician Bud Shank remembers how Stan Kenton helped him develop his own creative abilities. "Stan tried to bring out your best," he once told a radio interviewer. "I was hired to be lead alto saxophone player and I got paid to do that in the section. Art Pepper was the soloist but Stan knew that I wanted a chance to solo too and he found ways to give me chances even though it wasn’t what I was hired to do. He did the same for guys in the trumpet and trombone sections too. He was like a father figure to many of us."

The ‘50s performances gave bands the chance to feature singles and albums in the record stores (later in the 1970s and 1980s, bands took their tapes, T-shirts and other memorabilia along to sell). Band personnel could show off their talent, too. Butch Stone, the baritone saxophonist with Les Brown, was a comic singer, for example. Trumpeter ClarkTerry developed scat singing or "mumbling" to a fine art and performed it everywhere from the "Tonight" show band to a Whitesboro High School, NY Jazz Festival. Leaders even got into the act; Dick Jurgens could always be counted on for a few laughs, Harry James loved to pick up the bongos on Latin numbers and Stan Kenton, who told radio interviewers of his early shyness and stage fright in front of a microphone, could burst into a monologue to fill time or amuse himself. One of his best occurred when he was changing personnel and musical direction. He called it "This is an Orchestra!" but studio producers at Capitol took this Bill Russo orchestration and called it "Prologue."

Sometimes, band warm ups before engagements were like board room brain sessions where new ideas emerged. Shorty Rogers, the talented trumpeter/composer and arranger, remembered how such "head" numbers emerged with the Herman organization. "One of the most frequently played jazz numbers was an old standard called ‘Fine and Dandy’ and the guys in Woody’s band would get together back stage and just have fun doing it in jam sessions," Shorty told a Woody Herman Band Reunion crowd in Newport Beach, CA in 1993. "Woody came to me and asked if I would write a piece of music and use the chord changes of ‘Fine and Dandy.’ He said ‘we’ll call it ‘Keen and Peachy.’ I wrote the first chorus and I think Woody talked to Ralph Burns and he wrote part of it, too. While the crowd roared, Burns protested he didn’t remember a thing Shorty was talking about.

Yet, some bands, in their attempt to create and change, ran into stubborn opposition.

Kenton led the list. Trying to explain his very progressive style of the late 1940s and early 1950s, Kenton told a Palladium audience that the band’s "long works" of the "Innovations in Modern Music Group" which featured 40 strings and modernistic arrangements like Bob Graettinger’s ‘City of Glass’ concepts, might separate his loyal fans. "The fellow there has been so much heated controversy over in the music business is Bob Graettinger. Some people say it’s not music. . . some people say it’s great music. . . some people say I can’t find a melody. . . and some people say there is no melody, listen for sound."

What a way to introduce a program to those who came out to dance! Kenton refused to change his innovative trend. He lost money on several big orchestral enterprises but he never gave up his dream. He recognized his need to please fans that came to dance but his heart was certainly going in another direction. A poor kid from Kansas by way of California, he made money and, said Ed Gabel, a road manager in the early days, he spent most of his wealth on his 12 bands.

While the big band business was experiencing a noticeable economic slump in 1951. . . My aspirations for becoming a road musician soared. Late the year before, I had started work with Dick Trimble’s territorial band and, at the same time, acquired "wheels" (my mother’s bright red Dodge convertible which became mine to use since my mother didn’t drive) and I was making the awesome sum of $20 a gig. The band had a regular Friday night YMCA dance at the armory in Lancaster, OH and we would pick up another gig on Saturdays at special Elks Club events. Dick’s impeccable reputation for good dance music gave us high school proms as well as plush country club outings each year during the six I played.

Like many others, I reluctantly left for college (Bowling Green State University) in the fall, 1951, but it would take me time to hatch a plan to get my drums to campus. Returning World War II veterans crammed every land grant college in the country and, consequently, living space in a dorm was down to three drawers in one chest in a temporary barracks hastily constructed under the concrete stadium bleachers. You had to vacate Saturday afternoons in the fall or live through what sounded like explosions on the roof especially when either team scored. My bunkmates and I had the added attraction of a drain pipe beside our beds so we knew when the quarters ended, too. By the end of the semester, however, I had met a few other musicians and gotten involved with fraternity life. When I came back for my second term I had a room off campus that permitted me to return with my big Slingerland set. But I had to put a covert operation in place to make it work. I transported the set piece by piece in unmarked bags and boxes past a wary landlord. The bass drum was stored at the fraternity house.

I played with so many "no name" groups, trios and big bands that, looking back, the only memories are of guys like Vinny, Blue Flame, Jim, Fran and others who have since faded with the years. Each group was an experience. There was the noon I was called at the fraternity by a friend in one of the big bands in Toledo who said I could play with their 16 piece group that night. The regular drummer, a schooled professional, had gone south for National Guard duty. Could I read? I said 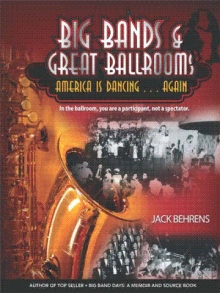 It was the worst of times – war and cold war – yet it was the best of times in the music business.

The Big Band Days, says author and former musician Jack Behrens about his new memoir and source book of the same name, were a wonderful chunk of Americana that continues to live today in different formats.

The swing era, Behrens and others believe, was simply too short.

"Jack recognizes . . . that music cannot survive as a museum piece and his nostalgic documentation of big band leaders, movies and ballrooms segue into a detailed listing on current jazz festivals, swing organizations, web sites and educational resources . . . As fond as I am of rock’n’roll, I wish the garage bands I played in had been struggling to play stock arrangements on ‘In the Mood’ or ‘Take the A Train’ instead of the top ten of 1965. I fantasize at times about growing up when my father did, when swing was the thing," says Monk Rowe, composer/arranger/bandleader and director of the popular Hamilton College (NY) Jazz Archive.

"Jack writes from a double perspective, as a fan and as a swing musician himself. He weaves stories and anecdotes from his extensive interview that illuminate the role of the well known and the hardly known. His own experiences as a young drummer were shared by countless sidemen whose names never made it to the back of the album cover."

gives you an up-close-and-personal look at the musicians of another day and their lives on the road but it also offers you an interactive way to connect with the music because it really didn’t go away. The book includes a complete listing of monthly jazz and swing festivals throughout the country and how to contact them, where to turn your radio dial to hear swing and big band sounds, where to study big bad, jazz and swing, internet sources about people instruments and events and a myriad of other information about the era.

And, says Monk Rowe, you just have to take the fifty-question big band trivia test at the end of the book. "It’s a hoot."