Computing in the Middle Ages 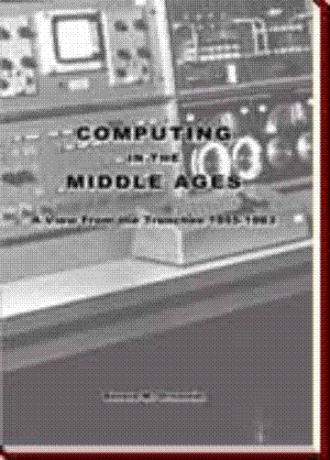 I initially set out to write this book because other histories seemed to ignore or even contradict my thirty-odd years of experience in the computer field. Developments that I was sure had marked important milestones were given short shrift or were overlooked altogether, and forces that seemed to me to be crucial in setting directions were sometimes not even mentioned. Debates that had once almost led to bloodshed, seemed to have been utterly forgotten once the passage of time had resolved them or rendered them irrelevant. And finally, for many younger people, history appeared to have commenced only yesterday ... whereas I was sure I remembered the day before, and the day before that. Indignantly I set out to put the record straight.

Then I remembered the fire-lookout.

In 1950, one of my college roommates spent the summer in a fire-lookout atop a peak in the Cascade range of Washington. From the lookout a vast mountainous region of the northwestern U.S. spread out before one, and over the course of the summer my friend drew a map of what he saw from his eyrie. Inspecting his map in the fall, and comparing it to official maps of the same area, we were vastly amused to discover how distorted his view of matters had been. The geography near the lookout was spread out and enlarged, whereas the more distant features were all crowded together around the fringes of his map. Like the New Yorker magazine's cover burlesquing a Manhattanite's truncated view of the U.S., my friend's view of the country surrounding his lookout was compressed into insignificance.

Contemplating such myopia, I realized that my version of computer history would likely turn out to be just as distorted as all the others ... just differently so. Moreover, as I considered pawing through dusty archives, I began to lose heart. It looked like a lot of work. Did I really care that much? Meanwhile I'd made a serious mistake. I'd mentioned my idea to a number of friends who began egging me on. What had I let myself in for?

The previous year I had been asked by a former colleague to give a lecture to his introductory computer class. Although his class was becoming increasingly computer literate, they had little or no comprehension of where the technology they were toying with had come from. Feeling that some background would not only be salutary but might even interest them, we agreed that I should try to summarize my own experiences of thirty years in the field and discuss the evolution of computer technology from that vantage point. It seemed a decidedly self-centered approach, but it had the sizeable advantage that little or no preparation was required. In the event, the class showed surprising interest in the history, and a number of the students later sent messages urging me to write it all down. I was pleased that I'd piqued their interest, but writing it down seemed absurd. After all, it was just my own narrow, personal view of what had happened.

Nonetheless, the seed had been planted and as time passed I began to understand that one of the things that was bothering me was the absence of the human theme in the history of what might be called the "middle-ages" of computer development ... the period between the days when only a handful of "giant brains" existed and the time when computers suddenly began to spread like wildfire throughout the society ... roughly the early 1950s to the mid 1980s.

What is contained herein, then, is a tale laced with anecdotes and commentary, half way between a personal memoir and a more general history. Rather than attempting to give an objective and comprehensive overview ... a God's-eye view ... I have tried instead to describe what it was like to be in the belly of the beast, to participate with colleagues in the process of exploration, and to give some idea of where concepts we now take for granted came from. My own biases and opinions are writ large throughout and because my own experience failed to touch many of the important branches of computer development, they will be found missing here. This is thus the antithesis of a comprehensive story. Nonetheless, I hope that from this tale will emerge some idea of the enormous differences between the computer world of today and that of the 1950s to the 1980s: and that the reader will be able to enjoy, and participate vicariously in, some pieces of the journey that connected the two. Because computers have so thoroughly invaded the lives of so many of us, I have particularly wanted this story to be accessible to everyone, not just computer buffs. I have therefore eschewed technical descriptions (or committed what some will no doubt consider egregious simplifications) and tried to paint images that could have been comprehended by anyone who might have happened to be at our elbows during that remarkably critical epoch of computer evolution.

Computing in the Middle Ages

is designed for the lay reader who wishes to understand some of the background of the computer revolution. It provides an easily understood and amusing account of what took place in computer research between the 1950s and the 1980s. The achievements of those days were later exploited by companies like Apple and Microsoft, which brought personal computers to the consciousness of the general public.

During that era ... when both the design of computers and expectations about the ways in which they could be used were undergoing dramatic change ... the author was "in the trenches" where seminal experiments were taking place, first at MIT and later at other universities and research centers. His unassuming story ... a breezy and irreverent memoir enlivened by amusing anecdotes from his professional and personal experience ... gives a human dimension to the otherwise dry and often obscure process of scientific and engineering innovation. Developments are brought to life and explained in terms that can be understood by anyone. Along the way you'll meet a number of memorable characters who, although often overshadowed in the public mind by entrepreneurs, are widely recognized as pioneers in the field of computer research.

In the late 1950s Severo Ornstein worked at MIT’s Lincoln Laboratory, then at the forefront of computer research. In 1961-62 he participated in the design of the LINC, the world’s first personal computer. He was later responsible for the hardware design of the IMP, the computer that handled messages for the Arpanet, forerunner of the Internet. During the same period he taught computer design at Harvard, and in 1972 he organized and led the first delegation of computer scientists to China. In 1981, together with his wife, Laura Gould, he founded Computer Professionals for Social Responsibility (CPSR), an organization concerned with the role of computers in society.