Curse of the Pirate's Treasure 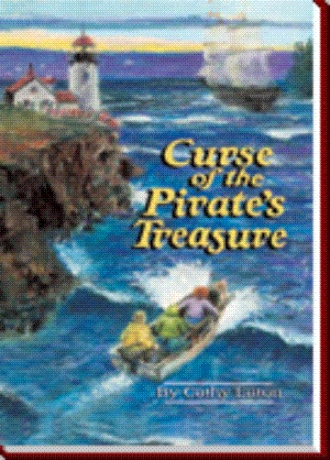 Rusty sat paralyzed, gulping oxygen into her lungs. The pitching waves controlled the boat. Hair plastered against her head, the bedraggled girl had no energy or weapons to fight back. The rowboat, so large and heavy to launch, now, near the mouth of the cove and drifting out to sea, seemed small and sinkable. Rusty braced her feet against the sides of the boat and clutched the worn plank where she sat. A splinter from beneath the seat, where the wood was rough, pierced her palm. Her cry funneled like vaporizing mist into the vast, darkening sky above her. No one could hear her pain. No one even suspected she was a prisoner floating farther and farther from the protection of shore.

As she raised her hand to inspect the wound, a wave tipped the boat, and Rusty tilted forward, banging her knees on the boat bottom. When she tried to stand, she lost her balance again. Back on her knees, she crouched in a tight, miserable heap. Down low in the center of the boat, she achieved some calm by forcing in and out deep, slow breaths. Her father had taught her this trick the day they had gone ice-skating at Rockefeller Center. When the wobbly child fell right in his path, his skates sliced across three of her fingers. Deep breathing had kept her from fainting while he bound up her injury and rushed her to the hospital in a taxi. However, there was no way her father could save her from this mess.

Gusts of wind and an onslaught of waves pounded with the intention of defeating her. She pushed them away, saying, "I've got to match my movements to the movements of the boat. I'm so dumb. I've been treating this stupid rowboat as if it were a piece of dry land." Keeping her weight low was good. Made her more part of the boat. Less an intruder. She lifted her injured palm and tugged the splinter out with her teeth. The sharp, stinging pain helped her focus. She pressed her hand in the cold water that whirled around her ankles and soaked her shorts.

Rusty wiped brimming tears out of her eyes and fought her rising panic. She commanded herself, "I've got to think. My life might depend on what I do next. I'll paddle with my hands." The boat was too wide for her to paddle on both sides at once. Spreading her body low on the bottom of the boat with one foot hooked around the seat, Rusty plunged her right hand again and again through the water. With the other hand, she clutched the side of the boat. After twenty minutes, her whole arm felt numb as she swept it through the frigid ocean. Her shoulders ached with the strain while her heart knocked against her chest like a demented woodpecker. The smashing waves made her efforts as useless as a minnow trying to swim up Niagara Falls. Plan number one bites the dust, she admitted.

Swimming seemed her next, best bet. Way better than sitting and doing nothing. She started pumping herself up like she always did before a swim meet at the YWCA. She rehearsed her game plan. I'll stand on the seat, dive in and swim for all I'm worth toward that hunchback boulder sheltering under those pine trees. Then I'll hike to a house. There, I can call the police. They'll come after the boat.

As soon as she thought "police," warning bells began clanging inside her head. Police meant questions. Questions meant explaining how she'd come by a boat that belonged at the end of the cove. Explanations meant bringing her mother into the picture. A distraught, weeping woman with daggers in her eyes was not something Rusty wanted to face.

Phoning Alex wasn't a possibility either. He was spending the day on Baker Island fixing a ferryboat engine.

As she admitted to herself that she couldn't abandon the boat, she studied the coarse rope piled on the bow seat. It was definitely big enough. Rusty stretched out and grabbed it, pulling it toward her. She tied it around her waist, tested the knot, and ate the last of her brownies for extra energy. After removing her shoes, she raised herself up and then, holding her nose, leaped into the water.

Fifteen minutes later, her teeth chattered like a dancing skeleton and her arms felt like they had done 1000 pull-ups. Rusty abandoned her plan. No way could she tow the boat to shore. Rough waves and the leaden weight of the boat had teamed up against her to shove her farther from shore than when she had started towing. The rope had rubbed her stomach raw, and her eyes felt like she had soaked them in chlorine. Water poured in over the sides as she tipped herself into the boat and flopped onto the bottom.

The water, already more than four inches deep, swirled around her numb legs. Two words kept chasing around inside her skull like charging stags ramming their antlers: Capsize, sink. Sink, capsize. She couldn't shut them up, so she decided to face them, to shrink them down to the size of wrestling hamsters. She forced herself to think of her predicament as a science experiment. She formulated key questions: Can I keep the boat from capsizing if I bring more water in over the side and fill the boat, making it ride lower in the water? Or will more water make the boat sink?

The coffee can, her worm container, answered her. It bounced off the bow seat where Rusty had wedge it and splashed into the boat next to her. It floated. Her decision was made. She'd get rid of the water. Rusty snatched up the bobbing can. At first, she planned to dump the worms over the side until she remembered how grabbing for the runaway oar had almost dumped her overboard. "Keep in the middle," she cautioned herself. As she shook out the worms inside the boat, she promised, "I'll take you to your garden home if we ever make it back to land." Rusty wished she were confident enough to say when we reach land.

She scooped water into the coffee can. The first time she heaved water over the side, the wind tossed it right back into her face. Rusty laughed - her first laugh in hours. She called, "Two points for you. I can't win this contest if I don't pay attention." She bailed more than 200 cans of water over the side, the other side where the wind couldn't soak her. Temporarily, the wind really was her friend, blowing the water away from the boat. Rusty kept her movements slow. Quick movements worked against her. Abrupt actions gave the wind and the sea the advantage as they waited for her to make a mistake. Like a crew of vengeful pirates, they wanted to throw her overboard into a watery grave.

The weary girl trembled. The clear morning sky with its warmth and promises of a tasty dinner had shifted during the early afternoon to a sky heavy with clouds and chilling threats. Brisk wind and breaking waves made her shiver with more than the cold. How was she going to get back to shore? No fishing craft or sailboats were anywhere nearby.

Rusty could hear Alex say, "Don't underestimate the sea. She's a dangerous lady. She doesn’t give many a second chance." How she wished Alex would come chugging along in his fishing boat. He'd toss her a line, and she'd tell him a whopper about how a giant eagle with fierce talons had stolen her oars to add to his Paul Bunyan-sized nest. When Alex's friendly chuckle turned into waves slapping the boat, Rusty scolded herself. Daydreaming - not just stupid, but dangerous. It wasted time, and she didn't know how much time she had left.

When your family rejects you and tries to control your life, how can you fight back?

Rusty’s life is blown apart when her father deserts the family to search for diamonds in Africa.  Forced to live in a Canadian fishing village, will this New York City teen die from boredom or die in the unforgiving sea?

After stealing a boat, Rusty becomes entangled in a feud, which escalates into criminal activity.  Will a pirate treasure offer salvation, or will its curse doom them?

Cathy Eaton spent many summers with her grandfather in Deep Cove, Nova Scotia, the place that always renews and invigorates her heart. So it was only natural that she set her first novel in Nova Scotia where she swam, canoed, fished, hiked and picnicked on many of the islands of Mahone Bay with family and friends.

She continued her outdoor adventures riding competitively and skiing with her family. In high school she received the short story writing award. While studying literature at Smith College and later at Bread Loaf School of English and Oxford University, she thoroughly enjoyed her travels across the United States, Eastern Europe, Australia, West Africa and Great Britain.

She began Curse of the Pirate’s Treasure in Asheville, North Carolina while teaching at the University of North Carolina and raising her sons Colin and Devon. The family settled in New Hampshire where she teaches fiction writing at New Hampshire Technical Institute, kayaks, and cross country skis. With husband Michael, the family vacations at Conway Lake where they continue to participate in water adventures and realize the energized peace of her childhood summers in Nova Scotia.