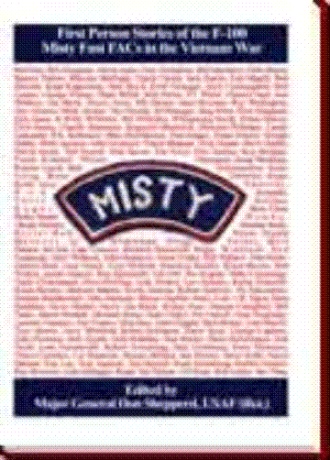 It was a quiet evening in March of 1968 at the Misty Ops Center, Phu Cat Air Base in South Vietnam. The phone rings, shattering the silence, and the duty officer answers and calls, "Hey Rutan! It's for you."

I look up with the silent question, "Who?" and the duty officer whispered, "He wouldn't identify himself."

I take the phone and respond, "Hello. Captain Rutan here."

The voice on the other end said, "I can't tell you who I am, but I know what you are going to do tomorrow. Don't do it! It's been taken care of. Do you understand?"

Confused, I responded, "I think so," and before I could ask a question, the voice was gone and the mystery caller hung-up. My little unofficial "solo safari" to a crash site near Ban Karai on the border of Laos and North Vietnam was just canceled by an unknown voice. I had just been granted a few days leave and had arranged to go to Nakhon Phanom Air Base in the most eastern part of Thailand, right next to the Laos border, which was the launching point for the helos that cycled the roadwatch and other clandestine Ops Teams in-and-out of North Vietnam and Laos. I felt I had to investigate and find out firsthand what happened to my buddy, Howard K. Williams. I had arranged to have one of the helos let me ride along and drop me off for a few hours in the crash site area and then pick me up on their way out. Since there was no "chute in the trees" and no beeper, or voice contact, I speculated that the ejection seat might have failed and my quick visit to the site could solve the mystery. It's tragic to lose a comrade, and cruel not to know what happened. Family and loved one's lives are put on hold, hoping against all hope.

For a period during the war, some F-4 units tried to upgrade a few of their back seat pilots to the front seat. Gunnery school in combat?--not a great idea. On one occasion, we watched a young lad on a strafe pass get target fixation and fly right into the trees. The F-4 hit and exploded with both canopies still firmly in place. The next day, we Mistys were asked to do an electronic search. We were asked to listen and call on the rescue frequency, because "beepers" were supposedly heard during the night. Based on this, I knew the families would cling to false hope, when there was none. When we finished our cycle, I landed at Da Nang on my way back to Phu Cat and briefed the Squadron Commander that the crew had perished. I asked and hoped that he passed the news on to the family.

Back in the spring of 1967 at Luke AFB in Arizona, the weather was perfect, and a new F-100 Long Course class had just checked-in. The entire place was on a "go to war" footing, from the intensity of the training, to the "devil-may-care" parties at the O-club. It was right where I wanted to be; something I had dreamed about ever since I first saw the Super Sabre at an airshow less than a decade before. We were new. We were eager and we were now on the fast track to high adventure. A few days after we arrived, there was an addition to our class; kind of a medical hold-over from a prior class - something about a late night party at the O-Club; too much beer; an altitude chamber ride and a "contest" on who could stay off oxygen at 32,000' the longest. The "winner" was Howard K. Williams, but he paid the price and only won a trip to "La La Land" and a stopover on a medical nightmare to get back onto flight status. So, when Howard came to our class, he had been around Luke for a few months. Howie was a fun-loving, good-natured guy; kind of quiet. You couldn't help but love the guy. Most importantly, he was one sh-- hot fighter pilot; smooth, but deadly, with a keen grasp of the situation. He was the class leader and the Top Gun, and we were all damned proud of him. Near the end of the course, Howie had an engine come apart while he was on the TAC Range. He tried everything to save the Hun, and then, calmly ejected. All he said, when he got back, was, "Nothin' to it. I didn't even lose my sunglasses." Boy, he was cool, and I was looking forward to combat with Howie.

As it turned out, most of our class went to Phu Cat and my friendship with Howie deepened. We became very close. After I was in Misty for awhile, I kept bugging Howie to come join us. "Hey, Howie, we see more action in one sortie up North than you'll see in your whole tour busting trees in the South," I would tease. I did not realize it at the time, but looking back, I don't think Howie was too keen on the transfer to Misty. He finally acquiesced, after my intense nagging. After all, he was our Top Gun and he belonged in Misty.

Howie completed his five obligatory back seat checkout rides, and flight number six was his first front seat Misty checkout. Brian (B.Willy) Williams was his back seat IP for his first front seat ride up North. As the two Willy's pulled up from a VR run in a real hot area in Laos on the Ho Chi Minh Trail, the Hun took a fatal hit in the fuselage right behind B.Willy's seat. With most of the left side of the Hun on fire, Howie turned the bird east, toward the dense jungle. After seeing the fire about to enter his cockpit, B.Willy suggested it was time to get out. Howie said, "Okay, go ahead. I'm right behind you." B.Willy ejected and was picked up by the Jolly Green an hour, or so, later. I was airborne in the Pack and got to the area just as B.Willy was being hoisted up in the helo. A couple of miles further east, I could see the smoking hole in the jungle right on the border of Laos and North Vietnam. I scoured the area between B.Willy and the smoking hole looking for Howie and saw nothing. It would be 24 long years before family and friends would know what had happened to Howie that day.

Almost every mission after that, I flew by low and slow, looking down into the hole hoping to see something, anything. I knew the answer to Howie's fate lay in that hole. And that's why I was going to NKP to get a helo trip in - to see for myself. The crash site was in the densest of jungles. I was sure no one on the ground would ever find the hole.

Howie's brother, who was also in Nam with the Army, came to Phu Cat to learn all he could about the downed plane and its pilots, but there was not much we could tell him. It really hit me, when the boss assigned me as the Summary Courts Officer to close out Howie's affairs; a most unpleasant task. I had to pack his personal effects, write the dreaded letter to his wife, and ship his belongings home. Everything had to be sanitized to make certain no items were included that could cause additional grief. There were none.

I had hoped that mysterious phone call was a report that Howie was a POW, but they could not tell me what, or how they knew. The fact that the caller did not tell me that Howie was dead, suggested he was a POW. That would have been understandable...maybe. I read and re-read all of the POW intelligence reports. I searched the names that the early releases brought out, and years later, I watched every POW getting off the C-141s at Clark AFB. I asked every returning POW I could find if they knew anything about Howie. I got nothing.

The Vietnam Memorial Wall went up in Washington, D.C. and bears the simple inscription, "HOWARD K. WILLIAMS." Each time I stand before his engraved name, I swear I see his reflection. I see his smiling face deep in the dark granite surface. I miss him, and for all th

is a collection of first person stories of 155 fighter pilots who flew in a special Top Secret mission during the Vietnam War. There has never been a book like this. These are personal stories – full of emotion, drama, tragedy and humor.

Over nine million Americans served during the Vietnam War. Between 1-1.6 million were in combat, or regularly exposed to enemy attack.

These are the stories of 155 men who were in heavy combat and shot at daily.

This is book of the personal experiences of the Misty Forward Air Controllers who flew as F-100 jet "Fast-FACs" over North Vietnam. The Misty pilots often coped with danger, anger and frustration by employing irreverent gallows humor. The authors use fighter pilot language.

These were difficult times in a long war. The men in this book flew in the Vietnam War, when they were in their 20s, 30s, 40s and 50s. They are now in their 50s, 60s, 70s and 80s. These are their memories. Join them as they attack SAM missile sites, AAA, truck parks and complete daring rescues of their downed comrades. Combat pilots, POWs, Medal of Honor winners - strap in, hold on and enjoy the ride.

Major General Don Shepperd retired from the Air Force in 1998 after almost forty years in uniform. He entered the Air Force at age seventeen as a cadet at the United States Air Force Academy, graduating with the class of 1962. After the Academy, he became a fighter pilot serving tours in the U.S. and Europe. He flew 247 fighter combat missions in Vietnam, including sixty as a Misty FAC. He left the Air Force after Vietnam and entered industry with Trans World Airlines and later became the national sales manager of the light aircraft division of Grumman American Aviation Corporation, Cleveland Ohio. After departing the service, General Shepperd stayed in the Air National Guard and later returned to active duty service, retiring from the Pentagon as head of the Air National Guard in January of 1998. He formed his own defense consulting company, is a writer of numerous articles and is completing a seven book series. He is a well known speaker and has recently been heard over the ABC radio network offering perspectives on military operations in the Persian Gulf, Bosnia, Kosovo, the expansion of NATO, the F-22, the Joint Strike Fighter and future prospects for defense budgets. He serves on several boards and resides in Alexandria, Virginia.