Bravo, Amerikanski! And Other Stories From World War II 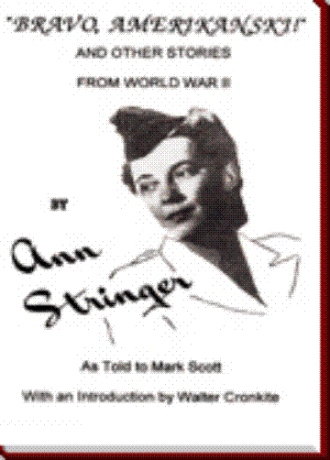 War correspondents had heard of the Nordhausen concentration camp, but hadn't known quite what it was, how bad it was. I found out for myself on April 11, 1945. As far as I know, I was the first correspondent to enter the camp, which was located on the outskirts of Nordhausen. I entered the camp with the Timberwolves, who were the first to liberate it.

An estimated ten thousand German political prisoners--about half of them dead and the rest dying--were found that day in some dozen bomb-wrecked buildings in the Nordhausen camp. All the prisoners had been sentenced for "crimes against the Reich." They had resisted the Nazis, had spoken out, perhaps, against the Gestapo, and had declined to be fanatic followers of Adolf Hitler.

As I walked into the camp with several GIs, I spotted some little huts. They were quite simple, made of wood, maybe twelve feet by twelve feet. Small. And so we walked into one of these little huts. Inside, bodies littered the dirt floors. Bunks were stacked three levels high, with two people to a bunk. On one bunk would be a living person, and on top of him would be a dead person--the body had already decayed, the smell was unbearable.

The living person would be too weak, too hungry to move. It was hard to distinguish the dead from the dying except that sometimes the dying moved a hand and tried to whisper a plea for food. The GIs and I felt horror and disbelief. You were there. You could see it. You could smell it. But you still couldn't believe it. It was beyond human conception. But there it was--you couldn t deny it. We couldn t stay in the hut long because of the stench. We turned and left, then saw hundreds of shrunken bodies, stripped naked by the Nazi guards, which had been stacked like cordwood.

I was led to another stench-laden building by Pfc. Sol Laxman of New York City. Near the doorway of the great barracks-like structure was the portion of a naked body. Nearby were others. A live prisoner inside told us later that those men had been executed by German guards when they had tried to flee the building during Allied air raids a week or so earlier. Four half-clothed, starved prisoners lay near the door. They were more dead than alive.

"American!" they cried in German, holding out skeleton hands as they wept. "American!"

Ann Stringer was the most glamorous woman correspondent of World War II. The ravishingly beautiful Texan who accompanied US troops on their drive into Nazi Germany was the first reporter to enter the liberated Nordhausen concentration camp, and got the scoop on the biggest story of the war--the linkup of US and Soviet armies at the Elbe River. United Press considered Ann Stringer its star reporter.

Mark Scott is a professional writer and public relations consultant living in California. He has been a Soviet analyst with the CIA, a political aide to the governor of Kansas, a professor at Pepperdine University, and a consultant to US firms doing business in Russia. His "Eyewitness Accounts of the World War II Murmansk Run" was published in both English and Russian editions.