Talks with a Quarter Sentinel 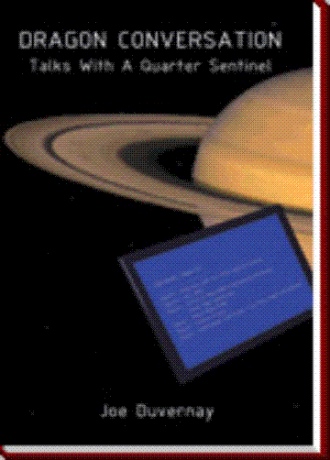 Every unknown source is confounded with irony as the wealth grows long.

Over bare and darkly night, monuments force and fade and follow broken slants of

straw men and women, and no manner of special privilege will convey the wanted

winnings that lie dormant there.

Cater to the best that lives with the worst and know that this is so!

All quiet the same.

And broken windows are all fixed.

And no more, as cry in the land, is heard soft moan of our fear.

His fear Her fear.

Don't wish to be too hard on you!

Philosopher is caught with 1984 personal computer, with e-prom escarpments

where fishes moan too.

And he dies many times. As each tree falls he knows and feels it and pieces of him fly away!

The salvation sought The crown in the jewel For chief certain!

I fear not knowing you and first principles abandoned!

But too let it be said

Don't let that scare you!

torrent of admiration and admonishment, between sheets of spilled coins and

announced curfews for returning them.

Traces of your scent.

Foundlings ranked up there with the most.

And exact all the misuse applicable.

Able to hear of your plight elsewhere in the world,

Came through it, only halved.

Could have been worse, was fortunate!

Other travelers did not fair as well!

Dogs and cats could easily have trained me.

Might have lain in the low grass and completely disappeared.

Ennui could have b\made me hers, that day in May, when distracted.

If my ears were turned to your discourse, could be a wastrel now.

In those grosser days, could easily have killed.

What was watching over?

Why did I only trip, not fall?

When night first showed herself, could have been brave,

But in retrospect, 'twere best I was scared.

As mothers and fathers fell to their knees, I screamed profanities too!

I blocked out the sun on those first days,

Then thinking better of it, moved aside.

Flowers always bloomed in my indoors.

Outside, mirrors were shades of a following.

Bought tickets to all the dark concerts,

Bashed my head-bangs against any standing wall.

Moods? Numbered in the billions.

Nothing I said in houses rang true in forests.

Never once sang with the choir. Oh, I was there,

But my mouth did not move.

Lost to an agony built on ruins of some religion I cared for at the time,

I simply sat down and waited.

As time passed on the edge of my tracks, a derailment was evident.

Every wasted hour danced and laughed before me as I sank.

Took the head-patting advice you gave and eyes teared.

When at last you let me teach, was pedantic, sorry!

I laughed in places specified for cries.

I put my tongue in there too.

Every word ever uttered was too loud and hurt my ears.

Could have been a comic, but my past got in the way.

On those varied occurrences when books acted like movies,

I stretched my imagination 'til, rubber-band-like, it slapped me awake.

By forgetting to, 'protect my appetite and my loves',

damned myself to this rising consciousness.

As my scientific method broke through doors and windows

And would not behave, as it came in with the dust that landed

Everywhere muse, it seems decided I was not in love and strayed.

Never admitted this before but, can hear angels and devils whisper.

Mounting and riding a captured beast, I became annoyed and dare I

I tooled up, suited up, rushed forward, slept in dank basements,

No one ever got close enough to see these eyes glow.

Studies in anthropology lost importance as the ships landed.

Trapped into a perilous precipice twice.

Lingered behind every arched entry, whether coming or going.

No mysteries were quite as mysterious as one part of self.

I buttoned buttons, zipped a zipper or two

And almost always cried in my soup.

I toyed with disaster and clamped-down the matter.

If you saw me as impatient then, it was mirage.

In the middle passage, took heads, shrank them to a manageable

Size and the game of marbles was born.

When your rope was offered, I cleaned fish and hid.

Louis, Charles, Ludger and Joseph are names that seek me.

This hat has wide brim and catches mist.

I learned from every lyric.

Just upon sitting at table, cornucopia walked away.

Largess cannot be ascribed to me.

Humbling this mind turns into a triangular marsupial course,

Where jumping is forbidden and leaping is de 'rigor

And I'll not argue the differences with you here.

The book is a work of poetry. I have allowed two fictional characters to open and close the work. The one is the 'bringer' of poems, "The Fifth Quarter Sentinel" described herein, and the other is the interviewer. The poems are what one poet thinks and feels about our time.

I hope that this work offends none and that something read in the work affects the reader positively.

Joe Duvernay has been "at" poetry for about 20 years now. (His first book included writings from the early 1980's.) Through this time, he feels he's been able to set down, to some degree, his emotions, etc.

He is father to 5 adult children and two previous books of poetry: I Begin (Poems, Essays, Thoughts, and Observations) and Offering.