The Conscious Exploration of Dreaming 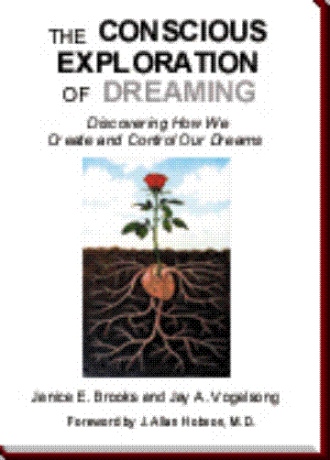 What is dreaming? Most people have asked themselves this question at one time or another and many have tried to answer it, usually by means of excessive speculations or elaborate theories. This book will offer evidence for a less well known but more reasonable theory of how dreaming works, evidence based largely on the experiences of three people who learned to observe and control the process of dream creation. Such controlled dreaming holds surprising significance for the nature of all dreams. Whenever we sleep, we almost always mistakenly believe that our dreams, however bizarre or absurd, take place in reality. Only rarely do some of us realize during our dreams that we are, in fact, only dreaming. Such dreams have been called 'lucid' because of this unusual clarity of thought. Becoming lucid enables one to clear away the dream world's typical morass of confusion and to construct a personalized reality. Lucid dreamers can escape imagined threats or tedium, and choose to fly, push through walls, work 'magic,' create entertaining dream adventures, and otherwise act in unusual ways in keeping with the new, more accurate assessment of their circumstances.

Lucidity also provides the ability to explore the nature of dreams by consciously experimenting within dreams to see how they respond to a variety of mental efforts. In our own experiments, the three contributors to this project could create dream sensations, objects, scenes, and characters merely by looking for them, manipulate them by controlling our thoughts, or make them disappear altogether. Such control seems limited only by the extent of one's own self-control and ingenuity, plus certain characteristics of the dream state itself, such as instability and incomplete access to waking memories.

Although becoming lucid sometimes disrupts a dream in progress, lucidity typically extends control rather than obliterating content. This may be due to the fact that the dreamer, despite understanding that the dream is not real, continues to interact with it as if it were real in some way. Ceasing this interaction and merely thinking about the dream can make the imagery disappear. Lucid dreamers therefore, whether they know it or not, end up striking a balance between action and reflection in order to keep the dream going while still maintaining lucidity. All this implies that one of the primary reasons we dream is because we mentally act as if we are awake, usually because we do not realize we are asleep.

Dreams do not, in this view, arise from the 'unconscious,' nor from the activity of any other individual part of the brain or mind assigned the task of scripting surreal dramas for some cryptic purpose. Instead we each create our own dreams from moment to moment as we experience them, using the same mental abilities ordinarily employed in waking to perceive, interpret, and act in the external world. Our own thoughts, feelings, and expectations about what we are experiencing so heavily influence dream content that we in effect control our dreams all the time.

The apparent lack of control experienced in ordinary dreams, and their many bizarre details as well, may largely arise from the mismatch between our reflexively applied, real-world habits of perception and behavior and the unique characteristics of dreams. Dreams lack the stabilizing force of external reality, and so have their own rules, much different than those governing the world where those mental habits developed. By discovering the inner workings of the dream world through direct experimentation, lucid dreamers can learn to extend the intrinsic control we all exert over our dreams. Lucid dreamers do nothing essentially different than ordinary dreamers; they merely do it with greater awareness and flexibility.

Up to this point, most investigators have missed many of the important implications of lucidity for ordinary dreams because they continue to interpret the phenomenon in terms of a variety of traditional theories. These include the belief that the striking content of many lucid dreams identifies lucid dreaming as an altered state, essentially different than ordinary dreaming. Many of these investigators' speculations concerning lucid dreaming and its possibilities seem inherently implausible, which casts serious doubts on the theoretical approaches from which such speculations grew. The present study will address such theories and speculations to clarify why they inadequately explain not only lucid dreaming but, by extension, all dreaming.

Dream lucidity and its effects demand a different theoretical approach than any of those commonly considered by all but the most critical investigators. Hence, the following chapters will not only flesh out the alternative explanation touched on above, but will show that our personal observations as lucid dreamers accord well with modern sleep and dream research. Such research has revealed a physiological basis for the periods during which sleepers so commonly imagine themselves to be awake, as well as for the disorientation that ordinarily keeps them from realizing they are only dreaming.

Although we will describe lucid dreaming and the speculations surrounding it at some length, we ask readers to keep in mind that the discussions have an important bearing on all dream experience. Thoughtful readers should find this book's explanation for dreaming much different, more coherent, and simpler than any of the views derived from popular, occultist, and psychoanalytic perspectives. The book should therefore be of interest to all people who find dreams fascinating, and even to many who presently do not. They may never think of dreaming in the same way again.

Dreams have drawn attention for ages, with their otherworldly, bizarre and sometimes unsettling content. Yet for all their allure, people really know little about them and how they are constructed. Everyone is familiar with various superstitious, occultist, and psychoanalytic ideas concerning dreams, yet these explanations do not really satisfy the more critically minded among us. Neuroscientific investigations of sleep and dreaming have done much to demystify dreams in recent years, but the viewpoint derived from these studies has remained unconvincing to those who consider such an approach overly reductionistic because it does not seem to connect with their own personal experiences and convictions.

The Conscious Exploration of Dreaming was written to bridge the gap between scientific and popular thinking on the subject of dreams. The authors and an additional colleague had all taught themselves to become proficient at the art of 'lucid dreaming,' or knowing that one is dreaming while the dream occurs. This talent enabled the trio to study dreams from the inside out, by performing a wide range of experiments designed to test the ways in which it is possible to control dreams while lucid. Such experiments gradually illuminated the natural means by which virtually all dreams may originate and unfold.

The understanding that developed out of several years' worth of experimentation and analysis of lucid dreams strongly supported a not unknown but relatively underrepresented view of dreaming, one which sees the process of dream creation as something rooted in the nature of the human perceptual system. A strong complement to the neuroscientific position, this perceptually based model has the potential to integrate a variety of perspectives and beliefs under the rubric of a single rational, commonsense approach. The present study should thus be of value to dream researchers and their students, members of the 'dream community,' lucid dreamers, and indeed anyone with a serious interest in dreams and human psychology.

FROM THE FOREWORD BY J. ALLAN HOBSON, M.D., AUTHOR OF THE DREAMING BRAIN AND THE CHEMISTRY OF CONSCIOUS STATES:

'It is my pleasure to encourage careful consideration of the unique body of data that forms the scientific base of this book. . . . Brooks and Vogelsong are true scientists in both their adherence to value-free description and their state-of-the-art interpretation of their data. The Conscious Exploration of Dreaming is a healthy antidote to the abundant New Age hyperbole on this important and serious subject.'

Janice Brooks and Jay Vogelsong are a wife-and-husband team who were brought together by their mutual interest in lucid dreaming. Janice, who has enjoyed frequent lucid dreams and related experiences since childhood, is an honors graduate of the University of Pennsylvania's programs in folklore and anthropology. Jay is a long-term private student of psychology who taught himself to dream lucidly as an adult out of curiosity. Their researches for this project were enhanced by the efforts of a third experienced lucid dreamer, Ruth Sacksteder. All three contributors have participated in various dream study groups and specialist publications, but the bulk of their labor and thought on the subject has gone into the production of the present book and its forthcoming companion volume, Dream Control.