I Didn't Want to Pay for a Rent-A-Car 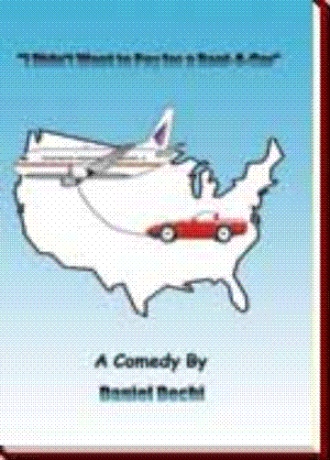 MYRON: Well Eugene, we're on our way to California.

EUGENE: Yeah, isn't it great? We get to see the whole country and then meet up with the old gang again! This is going to be our best vacation ever!

EUGENE: And I didn't notice this before, but the old Cadillac is running so smooth. I can hardly  hear the engine.

Suddenly, the landscape which consists of wide open fields, begins dashing by the car windows at great speed, while the soaring airplane can still be seen flying high above. This abrupt accelerated pace appears to have brought Eugene to become very worried.

EUGENE: Hey Myron. I know there's no traffic on these back roads, but don't you think you're going a little too fast? You're not trying to race that 757, are you?

MYRON: No, of course not.

EUGENE: Then why are you driving so fast?!

SIMON AND GARFUNKEL: ...slow down, your moving too fast. You got to make the morning last...

MYRON: ; The car isn't totally under my control.

MYRON: Well, I have some control over the car. But not total control.

MYRON: Okay, Eugene. Are you ready for a big surprise?

EUGENE: I'm not sure! But go ahead! Tell me anyway!

MYRON: Okay. We're going to cruise across this big, beautiful country of ours, not in six long days. But instead, we're going to arrive in our wonderful hometown of San Francisco, in just six short hours!

EUGENE: Did you say, six hours?! By car?! Myron, how in the world are you going to do that?!

Myron bestows a few loving slaps on the car's dashboard, and continues.

MYRON: Well Eugene. This strong, graceful model of proud, good old-fashioned American engineering, is tied to that airplane right above us.

The view from outside the Cadillac shows Myron attempting to calm Eugene, while Eugene continues his desperate blood curling scream. Expanding the focus to show a complete over view of the entire situation, reveals Myron's Cadillac barreling at break neck speed, through the vast, broad countryside, with an extensive cable stemming from the car's front grille, and leading high up into the sky, to the lower tail section of the soaring 757.

EUGENE: Myron, please, please tell me this isn't really happening! I know you've done crazy things in the past, but this can't be happening! Please tell me I'm having a bad dream, or something! Tell me anythng but that this car is tied to that 757, soaring thirty five thousand feet above us!

MYRON: Relax, Eugene. We're going to be fine. I'll be driving the car through desolate, wide open areas. And besides, I've equipped this baby with thermal sensors and a guidance device, to prevent us from hitting people and most other objects.

MYRON: Don't worry. That's why I also designed that super large bug shield to reinforce the front of the car. It'll protect us from anything that I'm unable to steer out of the way from. And this video camera will record a spectacular movie of our journey. The San Francisco Annual Film Festival takes place in two days. We're going to enter this film in the contest, so that we can win the big cash prize.

The car radio is now playing rock group R.E.M.'s hit song 'It's The

End OF THE WORLD AS WE KNOW IT, AND I FEEL FINE'.

I Didn’t Want to Pay for a Rent-A-Car

offers a creative work of fiction that interweaves ingredients of humor, fantasy, and expressive characterizations into a descriptive narrative. Revolving around the antics of two friends, Myron and Eugene, the saga unfolds as the two decide to take a car trip across the United States and back to their beloved San Francisco. Myron has attached a video camera to the dashboard, and plans to film the trip so that the can enter the results into the "San Francisco Annual Film Festival". Incidentally, the car has been hooked up with a large passenger airplane for speed. Through a careful plot, this story dramatizes the duo’s recollections of their childhood, arrival in their favorite city, and their success in the film festival.

Six years after being born in Latin America’s bustling, cosmopolitan city of Buenos Aires, Argentina, Daniel and his parents and younger sister immigrated to San Francisco. Once established there, the Barbary Coast’s mid ‘60s liberal and easy-going lifestyle played a heavy influence, although a consistent diet of super-hero comic books also played a large role in the author’s overall philosophy of life. A portion of the 1980s was spent on the East Coast, where Daniel enjoyed melting into New York City and Boston. Being an avid sports fan and athlete, Daniel also created a popular humor column for his soccer league newsletter. Additional artistic endeavors include a comedy series on Public Access TV. He also performs at a variety of comedy clubs in San Francisco and surrounding areas, in addition to various venues when he performs as the 3-D spectacled, caped character: "Blinky the Rock God". One of his unique talents which he performs on stage, consists of playing virtually any song, from Classical music to Rock ‘N Roll, by simply drumming his cheek using a No. 2 pencil. Daniel was also inducted into the 24th edition of Who’s Who in the East.